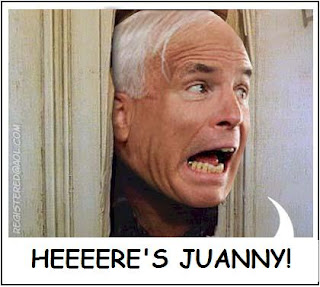 Meet “Juan” McCain. You already know him as John McCain. I doubt that McCain has any true Mexican lineage, based solely on my observation of his fish-belly white complexion. However don’t think this will stop him from getting in touch with his inner Mexican in the very near future.

You see, McCain will finally get a serious challenge for his Senate seat from Chris Simcox, a true patriot and founder of the Minutemen organization—an organization that is focused on the legitimate and irrefutable idea that America’s borders are sovereign. What should be the obvious view of all patriotic Americans renders Simcox a standout.

How better to draw attention to ineffectual RINOs like McCain, than to run against him. I say we join Simcox. Endangered Species Act “be danged;” let’s go RINO hunting! Along with us, RNC should relish in the idea of making a point to other ‘fence-walkers’ by taking a RINO out. And in the case of McCain, deservedly so.

McCain’s has been pandering to illegal aliens, or in this case of Arizona politics, illegal Mexicans, all for the sake of votes for years now. Because the fact of the matter is that no country in the world sanctions illegal immigration—only idiotic liberals and RINOS are willing to thwart sovereign laws. All in support of The New World Order. McCain talks a good game on “straight talk express,” however when it comes to self-preservation, he says, “No speaky Ingles.”

I won’t dismiss all that McCain has done, particularly in service of his country in the armed forces. However he has ridden that gravy train long enough, and it is time to release him of his too long career as a Senator. His constant need to befriend the Left vexes me, as like Obama, he has a need to appear open-minded, a centrist, a moderate, a popularist.

It may surprise you that there is legislation being discussed in liberal circles that will allow illegal aliens to pay a $2000 fine, and three of their last five years taxes, after which they can become legal. Essentially our government is so broke, we are allowing people to buy their way into legitimacy in the best country in the world. Yeah I said it!

For the average conservative, you would be better off petitioning to become an illegal alien, then only paying three of five years taxes, plus the $2000 fine, as you would likely come out thousands of dollars ahead. Do it quick, however before Obama makes Spanish a requirement for our re-citizenship test.

In the case of illegal immigration, McCain finds it convenient to “reach across the aisle”, pandering to racist liberal Democrats, who are always looking for more illegitimate votes. And when a so-called Republican is ready and willing to offer himself up as the poster boy for their ideological dysfunctions, they are happy to oblige.

The next stage after poster boy is whipping boy, as McCain found out during the election. The liberals know when to replace worn out shoes. I think it’s time Republicans learn to do the same. 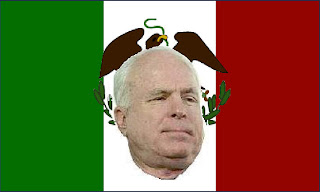 Despite McCain having over $3M in funds available for his Senate race, Simcox has a real shot. McCain has enjoyed big wins in his last three runs for Senator of Arizona, however he has essentially gone unchallenged, winning 76% of the vote in 2004. This means he lost 24% of the vote, with no challenger in place.

Not a bad start for Simcox, when you consider McCain proved his campaigning prowess in a contested campaign, where McCain essentially replaced Ned Beaty in the hillbilly scene in Deliverance. Talk about getting publicly “shagged” by a candidate who ran on the nebulous slogan of “hope and change.” Squeal like a pig…Weeee!

McCain’s new challenger actually is a patriot, and has a real cause—Stopping illegal immigration in America. Believe it or not, despite what the lamestream media reports, there are many Mexicans and other immigrants who are in this country legitimately, and who despise those who circumvent the system.

Unlike McCain, Simcox is passionate about the idea that enforcing our country’s immigration laws is the American thing to do. He represents the opportunity for conservatives and Republicans to stand up for a candidate who is willing to rock the establishment, and to prove to the Republican Party that we are serious about extinction of RINOs. This is our opportunity to tell John McCain and his ilk, “No more, friend!” Or in the case of Juan McCain…”No mas, amigo!” After all, he will soon be getting in touch with his inner Mexican.

Kevin Jackson is an author of four books in sales and politics, as well being the author of The Black Sphere blog. He has been published in Africa News and Hoovers. Visit Kevin at http://theblacksphere.blogspot.com or email him at [email protected]
The Black Sphere online magazine is at www.openzine.com/theblacksphere, and you can catch Kevin on The Black Sphere radio show every Thurs 9P-11P Central (times subject to change) http://blogtalkradio.com/TheBlackSphere
Facebook Twitter
Kevin JacksonApril 26, 2009
3 minutes read
Don’t Miss Out!