How does the guy who has accomplished nothing keep the lights on? With book deals! Apparently the majority of the money that Obama earned last year came from his two works of fiction, namely Dreams of My [Deadbeat] Father, and The Audacity of Hope.

Apparently Obama is a victim of his own economy, since his income fell from $4.7M in 2007 to just over $2.7M in 2008. Oh, that’s right, this is before his time. He inherited this mess. This mess was on Pelosi’s and Reid’s watch.

The good news is Obama did get a raise in salary this year, going from roughly $170K to $400K, and his new children’s book is on the horizon. How fitting when you consider that America is being governed by a man with the financial intellect of a 2nd-grader. I can hardly wait to see the pictures.

And after his first and hopefully only term as president ends, we may even get the sequel to The Audacity of Hope, titled, “Psyche…How I Punked America!” Expect this to be printed in twenty dialects of Arabic, with free downloads to Muslims from the Al-Jazeera website. And of course this book will be translated to Austrian!

As for Joe “Every Family Has One” Biden, well not a bad year for a guy who technically could be declared mentally unstable. Crazy Joe did write a book which managed to ride on the coattail of his boss’ success. Joe’s book sales roughly equaled his Senate salary, when you do the math. I doubt you could find anybody who will admit to buying it. I suspect Soros has 10,000 copies of this book in a warehouse somewhere, or perhaps providing kindling for the fireplace in one of his mountain cabins.

Despite only modest success of his book, Biden will write another. Now you may be thinking that Biden’s next book won’t be a hit; however I beg to differ. Considering the “train wreck” aspect of say a Biden’s Biggest Blunders, and you can certainly see the potential marketability of his next book. The Unbelievable Autobiography of My Life — Listed in the fiction section, of course! Admittedly, I might actually by that book as a reminder of some of the good hearty laughs I had during The Era of Brown Underwear – When Lunatics Ruled Amerika.

Back to taxes. Obama learned from his mistake from previous years, and bumped up his charitable contributions to just over 6%. This I will tell you was purely political, as Obama gave more last year to charity than he did in multiple previous years combined. However, there was no philanthropic revival in Obama’s conscience. Democrats are simply not givers; they are takers.

Republicans however are givers, and we give overwhelmingly more to charity than Democrats. And we do it without fanfare, and for politics. So for the occasional cheap-butt racist liberal Democrat who occasions my musings, be clear that Obama gave to charity this year simply to avoid the embarrassment from previous tax returns. He gave for politics.

Now Crazy Joe is indeed representative of the typical Democrat taker. Biden only lectures to others about giving, as he doesn’t follow the practice himself. Talk about cheap! Biden gave less than 0.5% of his income to charity last year. You couldn’t adopt an African child on the piddly amount he gave.

And when you consider that he paid roughly 18% taxes on his income, I’d say that’s pretty low for a guy earning his kind of coin. He’s just not as “patriotic,” as he wants the rest of us to be. 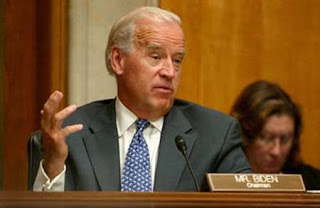 It bothers me that less than four years ago, Obama had to bum a ride home from the Democratic convention, as he was that broke. Then on the success of a couple of cheesy books that would amount to no more than 100-grit Charmin in my household, his wealth is created.

I have stated repeatedly that Obama believes Americans who make above $200K are lucky, just as he has been; or he considers us conniving idiots, such as Biden. That’s the problem when you really haven’t had to work in your life. You believe it’s all luck, as Obama does.

The tea parties that happened all over America the other day were attended by Americans who work, and see that Obama is a rank amateur when it comes to knowing how America works at any level. His policies are theoretical, cooked up in academia, with no practical application in the real world.

MIT once tried to build the most perfect internal combustion engine. They got efficiencies in multiple areas in the 90% range. Then they put the system together, and the engine ran unbelievably efficient…for about a minute. They found that they need inefficiencies, so the engine would last.

Obama policies are utopian, meant for perfection. He won’t find Utopia. Not even for a minute.

Kevin Jackson is an author of four books in sales and politics, as well being the author of The Black Sphere blog. He has been published in Africa News and Hoovers. Visit Kevin at http://theblacksphere.blogspot.com or email him at [email protected]
The Black Sphere online magazine is at www.openzine.com/theblacksphere, and you can catch Kevin on The Black Sphere radio show every Thurs 9P-11P Central (times subject to change) http://blogtalkradio.com/TheBlackSphere
Facebook Twitter
Kevin JacksonApril 17, 2009
4 minutes read
Don’t Miss Out!