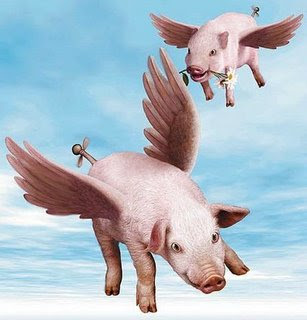 I find it fitting that at this time in our nation’s history there is outbreak of Swine Flu. When you consider that we have passed the largest pork bill in the history of the US, one can only conclude that ObamaNation is the origin of the disease’s resurgence.
The first cases in America appear to have sprung up in California, a state laden with diseased pork products, like RINO Governor Arnold Schwarzenegger and Speaker of the House Nancy Pelosi, among others. According to the CDC, CA is one of the areas currently being investigated as the potential epicenter for the disease in America.

As for the worldwide breakout of the disease, the lamestream media will is saying that this latest outbreak of the virus originated in Guadalajara Mexico. But I ask you consider the facts, as reported by Narco News, and then you may be able to connect the dots:

APRIL 16, 2009: Air Force One landed at 1:30 pm. CT at Benito Juarez International Airport in Mexico City, bringing with it President Obama’s first steps onto Latin American soil. At 1:40 he boarded the Marine One chopper and headed toward the Mexican presidential palace known as Los Pinos, where he landed at 1:54 p.m.

Shortly thereafter Obama began a private meeting with Mexican President Felipe Calderon, followed by a 3:45 p.m. joint press conference, a 4:40 p.m. meeting with US Embassy employees at the Intercontinental Hotel in Mexico City, and an 8 p.m. “working dinner” with members of the executive, legislative and judicial branches of the Mexican state at the National Museum of Anthropology. Obama spent the night in the city, departing the following day to Trinidad for the Summit of the Americas.

Now I am not saying that Obama gave the virus directly to Calderon, because the CDC has not determined if Calderon himself has been affected. However the recent outbreak of Swine Flu necessitated Obama giving $200M of taxpayer money to Mexico, which is nothing more than pork. Yet another way for Obama to buy a group of needy recipients. “Give us your tired your hungry, your poor, your…orget it–we will just pay you for them.”

Does anybody believe that ObamaNation will use this potential pandemic as a crisis to discuss healthcare reform? And not limited to America, as the global potential of Swine Flu makes this a potential world affair, like—Bird Flu! Remember that one!

As part of the socialist agenda and in support of The New World Order, Obama will be spending your tax dollars like a trophy wife on a shopping spree. And it won’t just be in Mexico. He will ask for more funding for the World Health Organization and for impoverished nations, a bill he wanted to pass as a senator–whereby America was to pay for world poverty. 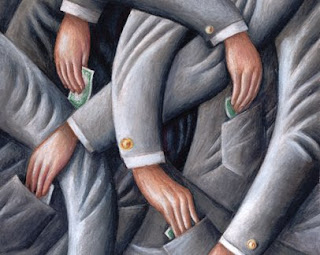 You want to know what Swine Flu is…a flu! The flu kills around 36,000 Americans annually, but we have learned to deal with it. I predict that after the final tally, Swine Flu will have done a lot less damage. As of this writing there were eight—count them—eight cases in six countries.

What Swine Flu does that the other more deadly flu does not is cause alarm—a crisis! And crisis is just what ObamaNation needs to spring into action, spending what they deem as our hard-earned money in the form of pork.

You can expect this potential, repeat, potential pandemic will be the rallying cry for protecting the poor, the old…the children of America—and ultimately the world. Who wouldn’t want to protect the children—only those mean ol’ meanies…the Republicans.

The only real Swine Flu is that which is permeating Washington, the real epicenter, to the tune of $3.6T and growing. And Obama infects everybody he meets, as he drains our treasury in search of more subjects. This crisis is just a way for liberal Democrats to turn the silk purse that is America into a pig’s ear. Guess who will pay for it?

Kevin Jackson is an author of four books in sales and politics, as well being the author of The Black Sphere blog. He has been published in Africa News and Hoovers. Visit Kevin at http://theblacksphere.blogspot.com or email him at [email protected]
The Black Sphere online magazine is at www.openzine.com/theblacksphere, and you can catch Kevin on The Black Sphere radio show every Thurs 9P-11P Central (times subject to change) http://blogtalkradio.com/TheBlackSphere
Facebook Twitter
Kevin JacksonApril 27, 2009
3 minutes read
Don’t Miss Out!