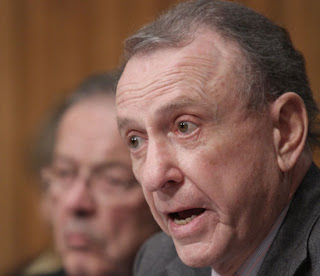 Arlen Specter left the Republican Party for self-preservation. How pathetic! Almost eighty years old and Specter is still trying to figure out how to hang on to that “gubment” job. Here I thought only poor people worked into their eighties. What we have here is a new phenomena called “The Specter Condition.”

In the real world, eighty-year old men don’t “change sides.” My octogenarian great-grandfather believed when he turned off the radio, he shut it off for everybody. Nobody could convince him otherwise, and we certainly tried. I admired his resolve. Right or wrong he stuck to his guns. Now he only had a 3rd-grade education, and spent his entire life picking cotton and living in squalor, so he had an excuse.

Specter however is an eighty-year-old educated senator. He is supposed to have lived his life in such a way that he knows who he is. Most real men gain a set of core beliefs by the time they are forty—max! Apparent with a spineless RINO like Specter, it takes twice as long—Yet another indication that Specter was a liberal Democrat.

Regardless, if I actually made it, I would be all over the Washington social circuit. I’d do it the Fred Thompson way, which is to run with the big dogs, hang with the star-boinkers (ladies only—I’m no Barney Frank), until I was ragged. And I would amass my fortune, just like the rest of those crooks in Washington.

But…BUT…by the time I was eighty, I think I would be ready to abandon my life of debauchery and my life in politics—dare I be repetitive—maybe do some traveling or something. Life would be one continual vacation for me, outside of the occasional speaking engagement, which would pay for me and my significant other to visit either tropical or luxurious locales.

Yet here is Specter, a cancer survivor for God’s sake, wanting to apparently die in a senate seat. That senate seat must be injecting his flat, flabby butt with heroin, because I would “suck paper” leaving that job…at say sixty! Mission accomplished!

Then again, why leave when you have a cushy job of doing essentially nothing. Your “boss”, the America public is generally forgiving. And the job is easy. You really don’t need to be able to read, as in legislative bills, which we found out during Obamulus von Porkulus.

Nevertheless, by eighty, enough is enough. So why would a weather-worn, cancer –surviving, flip-flopping supposedly learned man want to stay? Maybe Specter has decided to try to “pickle himself” for a few more years—to make amends? “I’m a Republican, no I’m a Independent, no I’m a racist, stupid Democrat“—I’d say the voters of Pennsylvania have NOT gotten their money’s worth. I’d consider the “I want to make amends” excuse more seriously had Specter not joined the ranks of the racist, elitist Democrats.

Ironically, Specter was the same senator who said that senator’s should not be able to switch parties in mid-term. With ethics like this, why bother just switching parties, and just go for an Obama cabinet spot? You can tell that Specter is a liberal Democrat, as he undoubtedly aimed low in this recent decision. 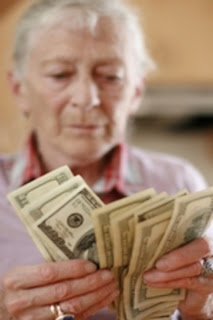 I can see Specter’s change in the real world, where people change careers, in order to survive a layoff and so on. But I don’t see how this could happen to Specter.

I suspect that Specter has used up all his “cat lives” anyway, so I don’t think we will have to worry about him politically much longer. But I think he is sending a bad message to people of all walks of life, in that he is saying “desperation is an alternative.”

I say Specter is desperate, and speculate that he is out of money; money he likely lost in the financial meltdown—the meltdown created by his newfound racist Democrat Party. I further speculate that Specter has a “tax problem.” If so, then that would be a legitimate reason to join the party of tax cheats—or at least the party he can get away with cheating on his taxes.

What we are witnessing is a senator who is finally in touch with the rest of America. And it took the election of a no talent hack to bring “The Specter Condition” to the public’s attention. That is, with Obama in office, even formerly rich white folks will have to work into their 80s.