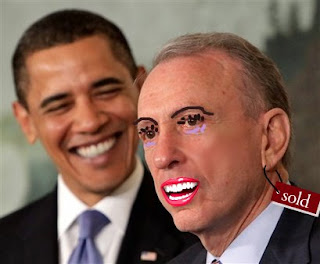 One guess as to why Colin Powell says he’s “still a Republican.” In case you didn’t guess right, here’s your answer. He doesn’t want to be treated like Arlen Specter! To put it gingerly, Specter got “punked in” to the Democrat Party. Thus we begin—A Prison Tale!

Specter is the new “chubby cheeks” in prison, and the Democrats are the Aryan Nation gang. The Dems assign a handler (Schumer) to help Specter see the need to join the gang. Schumer explains that Specter  a white man shouldn’t be associating with the party that gave blacks their freedom, and passed all laws protecting blacks–The Republican Party for all you ignorant Democrats and liberals–“That just doesn’t look good,” Schumer explains.

Specter, having accomplished little to help blacks as a Republican sees the futility of his situation. Attracted by the cool lightning bolt tattoos, and a few smokes, Specter joins the Democrat Aryan Nation (DAN). DAN promptly slaps a wig and some lipstick on Specter—if sensitive, you might want to turn away here—and they all have their way with him.

That is how racist Democrats treat white “Republicans” who defect. Imagine what they would do to an “uppity Negro” [LBJ quote]—though Powell is considered “high yellow.”

While we are on the subject of color, a lot of you likely think that I am kidding about how racist Democrats view blacks—I am not. Contrast the treatment of Powell—a relatively light-skinned black, to Alan Keyes—a rather dark black gentlemen.

Racist Democrats can tolerate a black—as long as he’s not “too black.” Many meddlist whites made comments that by not voting for Obama in the last election, Republicans were racists. Yet you couldn’t find any of these true racist meddlist whites who voted for Keyes…the real black man! And Keyes ran back as early as 1996. Where were the racist Democrats back then, or the so-called Moderates?

And don’t think black people get a pass. Blacks have their own “color test.” Vote for the light-skinned snake oil salesman with no credentials over a true patriot like Keyes—then have the nerve to call whites the racists! More blacks play Bridge than voted for Keyes. I guess he was just a little too black, even for black folks? Don’t tell me you differ philosophically, conservative black person who ignorantly votes Democrat, ergo “liberal”?

Powell is well aware there is no love for Republicans who switch to join the ranks of racist Democrats. After the switch you get fifteen seconds of fame. Paraded around the prison yard like the new kid in town–followed by a lifetime of “gender confusion”. “Just because they did that to me doesn’t make me gay does it?” No General, it just makes you stupid!

And after the unnatural act, the Democrats are quick to cast you amongst the Sodomites—Gen-Pop (General Population). There you are ridiculed. Fair game for the real prison predators—in this metaphor—the mainstream media.

And the Democrats and the lamestream media are happy to roll Powell out as the poster boy of “what the Republican Party needs”. He is treated like “the voice of reason” in a party in turmoil. Powell reward is a lucrative hustle. 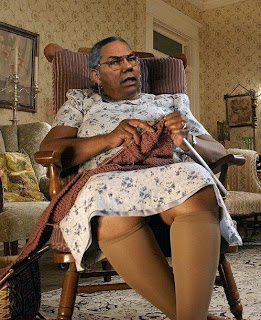 Anybody who believes Powell was ever a real Republican needs to get off the hallucinogenic drugs, and this includes Powell himself. Just because he said it, doesn’t make it so. I have demoted the General to Private and suggest he seek treatment. He has caught the disease of liberalism.

Powell is no more a Republican than Karl Marx. He just knows how much the liberals and the media love Republicans who take a furlough from the reservation—but come back. If Powell declared his real affiliation, Democrat, he would quickly become just another black Democrat, in a sea of black Democrats. A “no big deal.” By remaining (whatever) Republican, he can be a thorn in the side of the Republicans. A finger in the eye from time to time. A rock in the shoe.

Like with Specter, the Democrat Aryan Nation has handlers for Powell. He is being courted by ignorant liberals such as Keith Olberhack and Rachel Madcow to make that move. I say to Powell don’t slip in the shower or pick up the soap, yes watch your back Bro. Because DAN stands ready to “punk in” Powell.

Kevin Jackson is an author of four books in sales and politics, as well being the author of The Black Sphere blog. He has been published in Africa News and Hoovers. Visit Kevin at http://theblacksphere.blogspot.com or email him at [email protected]
The Black Sphere online magazine is at www.openzine.com/theblacksphere, and you can catch Kevin on The Black Sphere radio show every Thurs 9P-11P Central (times subject to change) http://blogtalkradio.com/TheBlackSphere
Facebook Twitter
Kevin JacksonMay 27, 2009
3 minutes read
Don’t Miss Out!