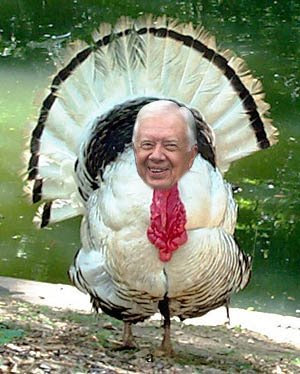 If you really want to embolden an enemy of America, then just elect a Democrat for president. One doesn’t have to think back too far in history on this subject for great examples of Democrat president disasters, when it comes to protecting Americans.
In the 70s, Nixon bailed out LBJ’s fiasco in Vietnam. Had he been president earlier, (1) we may never have gone to Vietnam, and (2) if we had, we would have kicked their butts—and the Russians.

Nevertheless this blog is about warmongering racist Democrat presidents. In this exposé, let’s begin with Jimmy “Peanut Head” Carter, whom I say with authority is the worst president in modern history—feel free to remove “modern,” if you’re a purist.

Spineless racist Democrat Carter fathered the radical Muslim jihadist movement, when he allowed a group of Iranian students to take over our embassy in Tehran, and hold 66 Americans hostage, as report here:

On November 4, 1979, an angry mob of some 300 to 500 “students” who called themselves “Imam’s Disciples,” laid siege to the American Embassy in Teheran, Iran, to capture and hold hostage 66 U.S. citizens and diplomats. Although women and African-Americans were released a short time later, 51 hostages remained imprisoned for 444 days.

You will find it interesting that the Jimmy Carter library report of this incident calls the students “militants”, as if they were some highly trained group of elite folks who did this. Whatever.

Carter tried to rescue the hostages with a failed military operation, mainly to try to save face after the hostages had been in captivity for so long, as the American public was growing weary. The mission— indicative of the Carter presidency—was a dismal failure. So the hostages remained—that is until Reagan was elected president.

Minutes after Reagan was sworn in, the hostages were released. Anybody want to take a guess at what the Iranians were thinking, as to how Ronald Wilson Reagan would handle things? Let’s just say that waterboarding would have been the least Khomeini’s issues. Imagine if Obama had been elected under the same circumstances?

Next racist Democrat president failure—Bill “Why’d you keep the blue dress Monica” Clinton. Do you wonder why the Somalis are so bold as to challenge the world’s shipping industry, and the power and might of the US military? Can you say “Blackhawk Down?”

Clinton’s inability to handle war with a third-world African nation was put on display against an elite band of Somali fighters. And in typical Democrat president style, Clinton botched a job a fifth-grader could have achieved with a military like ours. Talk about disgracing the most powerful military in the world. When you can’t defeat a ragtag group of terrorists, and essentially have to high-tail it out of a country under BB-gun fire, that just speaks volumes of the Idiot in Chief. 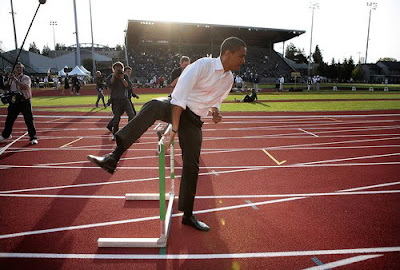 Clinton did take a stab at redemption, shooting a missile at an aspirin factory—oh, and at an intern named Monica Lewinsky. One missile missed its mark. [Giggle]

Thankfully George W. Bush stepped in and re-established America’s position on “Don’t Mess with Texas,” by kicking some Iraqi tail. Bush also told the world that the US is not beholden to anybody when it comes to our sovereignty and protecting our citizens.

With all the potential world hot spots looming, is there any sane person who believes Obama to be the right man for the job? I know he was recently battle-tested in Somali with that confrontation…with the four Somali pirates.

“At least he did better than Clinton,” I can hear Obama’s racist liberal admirers saying. To them I quote Madeline Kahn from Blazing Saddles, “It’s twue, it’s twue!” If only Obama were to do for America what Cleavon Little did for Rock Ridge?

The lesson in history is that Democrats start wars—Republicans finish them. And if history is any indicator, after America disposes one spineless so-called Democrat leader, we will get a good strong Republican president to restore America to her past greatness. This next time we get rid of a spineless racist Democrat, let’s try to keep it that way.

Kevin Jackson is an author of four books in sales and politics, as well being the author of The Black Sphere blog. He has been published in Africa News and Hoovers. Visit Kevin at http://theblacksphere.blogspot.com or email him at [email protected]
The Black Sphere online magazine is at www.openzine.com/theblacksphere, and you can catch Kevin on The Black Sphere radio show every Thurs 9P-11P Central (times subject to change) http://blogtalkradio.com/TheBlackSphere
Facebook Twitter
Kevin JacksonMay 13, 2009
3 minutes read
Don’t Miss Out!