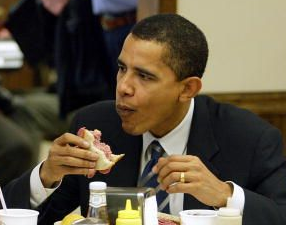 The lamestream media continues to baffle me in their ability to put lipstick on the bulldog, when it comes to reporting on Obama. Their most recent revelation was about Obama—America’s new “Average Hussein“—getting a hamburger! Unfortunately, that is what the new media deem hard-hitting and newsworthy.

And when they do report actual news, as in this recent article in the AP, here is how they informed us: Layoffs slow to 539K in April; jobless rate rises. So there is good news; and an afterthought.

Perhaps to make my point a bit clearer, I will show you what the AP would have titled this story had Bush been president, instead of Obama: Layoffs continue downward spiral; unemployment reaches crisis levels.

Despite the fact that we lost 539,000 more jobs this week, the AP reports this as “not so bad” news under ObamaNation. I’m sort of getting used to getting the “optimistic” view of the news these days.

Janet, co-anchor – Obama News Network: Today, there were three people killed and two injured in a factory shooting, where layoffs had just been announced. Wow, that could have easily been five people dead, huh Ted?!

Ted, co-anchor – Obama News Network: It sure could have, Janet. Great report. Looks like that disgruntled worker may benefit from President Obama’s plan after all, and get his old job back after all.

I should give the AP credit for daring to report that the “jobless rate rises.” This is actually more than I would expect from the so-called media these days. The article does go on to point out the high unemployment rates in this way:

But the unemployment rate climbed to 8.9 percent, the highest since late 1983, as many businesses remain wary of hiring given all the economic uncertainties.

Obama’s insane policies breed uncertainty for sure. Quick recap: Eliminate foreign investment by corporations through double taxation. That’s a move sure to create jobs…in other countries!

Next, Obama provides massive funding to corporations doomed to failure…so the government can run them! The Fed—Bastion of inefficiency and ineffectiveness. These are not concepts taught in business schools anywhere in the world.

I now believe that the only person more stupid than Biden may be Obama. And Obama is just as unpredictable:

Obama: “Ok American, today, uh I have uh decided to give a tax cut of uh $1500 to everybody who works at a 7-Eleven. And add $2500 to that, if you uh drive a uhChevy! And if you entered the country uh illegally and won’t provide your birth certificate. Make it happen, Rahm…Strike that last part!” 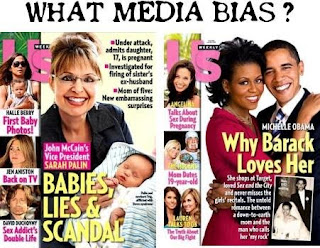 The other day the stock market rose seven (7) points, and it was reported as if we were in a new bull market. News anchors were jubilant that the market remained flat, and had not tanked—the norm in The Era of Brown Underwear.

I’m not sure what it will take to get the lamestream media back on track. I have seen decades of the most one-sided reporting in the history of the country. It’s to the point that they really don’t even try to hide it anymore. When you consider this overbearing bias, and the fact that an old washed up RINO like McCain was able to hold his own against such demonic forces, it says something for the core of America. Despite reports by the press of the breakup of the Republican Party, I think we may be getting stronger in all this. Now we just need to find the right candidate.

In the meantime, we can expect the media to continue to create good news from bad, when it comes to Obama. Who knows how the media will report things. For example, a biological attack on the US could appear as…Swine Flu originating in say, Mexico?

Kevin Jackson is an author of four books in sales and politics, as well being the author of The Black Sphere blog. He has been published in Africa News and Hoovers. Visit Kevin at http://theblacksphere.blogspot.com or email him at [email protected]
The Black Sphere online magazine is at www.openzine.com/theblacksphere, and you can catch Kevin on The Black Sphere radio show every Thurs 9P-11P Central (times subject to change) http://blogtalkradio.com/TheBlackSphere
Facebook Twitter
Kevin JacksonMay 10, 2009
3 minutes read
Don’t Miss Out!