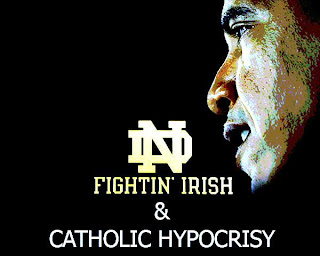 As Obama speaks at the Notre Dame, Dan Brown’s Angels and Demons coincidentally has opened in theaters across America. Keep in mind that in Angels and Demons dark forces are attempting to destroy the Catholic Church. The irony!
Reverend Sorin, the founder of Notre Dame must be rolling over in his grave at the idea of Obama speaking. And for you real historians, Obama’s commencement speech at Notre Dame offends either Constantine or Jesus Himself—the real Messiah. You are the rock upon which I shall build my church – Saint Peter.

I say to Notre Dame the same thing I asked Catholics after the election: What the heck were you thinking? Catholics voted overwhelmingly for Obama. To be religious and voting for Obama are mutually exclusive. You simply cannot have both. And neither can Notre Dame.

I know that Obama claims that he is religious; however I say definitively that he is not. Obama has very few beliefs that mimic religion. Obama worships at the altar of Obama. He is not a Christian, and has revised our founding fathers’ stated purpose, saying that America is not a Christian nation—a blatant lie. America is a country that welcomes all faiths; however America was founded on Christian values. I can only conclude that Obama is attempting to destroy religion…at least religion in America. And Notre Dame is providing the stage.

Obama the Impious has been to church once, since getting selected as president. Prior to that, he attended church for political expediency for twenty years. There is no way a true Christian would attend Trinity United church for a month, much less twenty years. For the “partiers” still attending this so-called church—they are there for the show. People who attend Trinity United are not there to find God, though God is there. But he is just shaking his head at those fools.

Trinity United church is full of black racists and bigots—sprinkled with a few white apologists, aka “meddlers.” Twenty years in a real church and you cannot support partial-birth abortion. Twenty years in Trinity United hearing Black Liberation Theology, and as Obama said, [pp] “…determining when life begins is above his pay grade.”

I wrote a while back in Abortion for Dummies that of the 6.5B people in the world today, and the 6B who are now deceased, I defy anybody to tell me which ONE of these people skipped the moment of conception? Give me just ONE? A simple conclusion to when life begins, and it is above Obama’s pay grade? Yet my 16-year old understands when life begins completely. Apparently Notre Dame doesn’t get it either.

Perhaps if Margaret Sanger were alive, she might be getting her honorary degree from Notre Dame since Obama exalts the high priestess of racism. The well-documented public views of Sanger were that abortion could be used to destroy “undesirables.” This is what racist Democrats of today say—behind closed doors.

Notre Dame needs a reality check. The way I see it, the university has been corrupted. I don’t know who has gotten to them, though I have my suspicions.

Here is what Obama said at Notre Dame according to Yahoo News:

“But he still implored the University of Notre Dame’s graduating class and all in the U.S. to stop “reducing those with differing views to caricature. Open hearts. Open minds. Fair-minded words. It’s a way of life that always has been the Notre Dame tradition.””

Obama is not just for abortion. Obama is so for infanticide, as he said here:

“I’ve got two daughters. 9 years old and 6 years old. I am going to teach them first of all about values and morals. But if they make a mistake, I don’t want them punished with a baby.”

Kevin Jackson is an author of four books in sales and politics, as well being the author of The Black Sphere blog. He has been published in Africa News and Hoovers. Visit Kevin at http://theblacksphere.blogspot.com or email him at [email protected]
The Black Sphere online magazine is at www.openzine.com/theblacksphere, and you can catch Kevin on The Black Sphere radio show every Thurs 9P-11P Central (times subject to change) http://blogtalkradio.com/TheBlackSphere
Facebook Twitter
Kevin JacksonMay 18, 2009
3 minutes read
Don’t Miss Out!