The prostituting of GM and the American taxpayer continues—GM is selling Hummer to the Chinese. If I was a betting man, I’d bet that Clinton had a hand in advising The Big O on this move. [snicker]

And why not give Hummers…I mean sell Hummer to the Chinese? They are America’s largest creditor. And they have been noticeably upset at Obama’s handling of the American economy, or more to the point—for printing so much new currency, therefore devaluing the dollar. The Hummer deal is most likely collateral that the Chinese are demanding from America, now that Obama has taken our credit score into the low 500s.

“No more credit for you, Obama. We need corraterar [collateral]. You no good invesmen no more! You maka it rough for nex brack man!”

In the spirit of having ‘the most transparent administration in the history of America,’ the details of the sale are not being disclosed. Why should ObamaNation tell the American taxpayer what we are getting for our 60-70% ownership in the new Government Motors? It’s not like we could have done anything about it. The Democrats can and will do whatever they want—and they prove it almost every day.

I know what you may be thinking—GM has a CEO and this was his decision. Not true, silly Negro. This was Obama‘s decision.

And what did Obama get for the hardworking American taxpayer by “turning out” Lady Liberty? The figure being bandied about is $100M. That kind of money is “lip service” –pardon the pun—on the billions GM owes the American taxpayer! That won’t cover the interest on the $50B+ GM owes us, and Obama knows this.

Here’s how it works.

Obama spends $100B or so on saving the unions. Then he gets the American taxpayer a rebate of 1% back—because Obama knows that people like rebates. We like specials.

Next, Obama cut 121 government programs saving the taxpayers a whopping $17B. This is less than half of one percent of Obama’s gut-busting budget. A rounding error at best! Such is the Obama way. Here’s how Obama is asking us to cut back, do our part:

“Air up your tires, get a tune up, take stuff out of your trunk, and we can save 15B gallons of fuel in twenty years.

Help me help you watch me destroy America.” – B. Hussein Obama

The prostituting of GM is subterfuge to get your mind off the money he has squandered on “… the industry too big to fail—but did!” 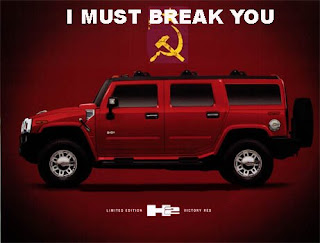 You’d think that after giving the Chinese Hummers, we could at least keep manufacturing in the US? Just one more roll in the hay for old time’s sake? ‘Fraid not. Manufacturing for the Hummer will now all be completely in China.

Reuters reports, “The deal marks the first time that a Chinese buyer has acquired a brand from one of the struggling U.S. automakers.” Yet another first for the Obama administration, and further confirmation that we are in the Era of Brown Underwear.

Maybe Karl Marx was right? Communism really is utopia. Because the capitalist American taxpayers are getting screwed—and not in that good way. Meanwhile, America’s biggest creditor, communist China is getting Hummers—and happy endings!

Kevin Jackson is an author of four books in sales and politics, as well being the author of The Black Sphere blog. He has been published in Africa News and Hoovers. Visit Kevin at http://theblacksphere.blogspot.com or email him at [email protected]
The Black Sphere online magazine is at www.openzine.com/theblacksphere, and you can catch Kevin on The Black Sphere radio show every Thurs 9P-11P Central (times subject to change) http://blogtalkradio.com/TheBlackSphere
Facebook Twitter
Kevin JacksonJune 3, 2009
3 minutes read