If you like the blog, please consider ordering a copy of The Big Black Lie, (see the button to your left!) my newly published book. It will give you insight as to why I enjoy pimp-slapping liberals on a daily basis. Speaking of pimps, enjoy my latest musing below:

Obama has deemed June 2009 “Lesbian Gay Bi-Sexual Tran-Gender (LGBT) month.” And just in time for summer! I am not gay. However on behalf of gay blacks, I want to thank Obama for honoring this group with now TWO months out of the twelve.

How good it must feel for Obama to tell “Americans” of any ilk, that they can have a month. Personally I like having all the months to be an America—not just my designated one.

Further, if I had any choice in the matter, I would not have picked February anyway. It was as if the meddling, racist Democrats, who were attempting to make up for their racist past said, “Let’s give blacks Feb. It’s the shortest month!” [Belly-laugh by all racist Democrats who came up with this one]. Besides, February is a cold month, and blacks really don’t like the cold. We are warm weather people. Think Orlando, not Green Bay. So I would have opted for a spring or summer month. Perhaps May—it has 31 days!

Before my black audience gets all in an uproar over the LBGT getting June, I should stress that they only get it for one year, as Obama states here on the official White House site:

“NOW, THEREFORE, I, BARACK OBAMA, President of the United States of America, by virtue of the authority vested in me by the Constitution and laws of the United States, do hereby proclaim June 2009 as Lesbian, Gay, Bisexual, and Transgender Pride Month.”

So LBGT, I suggest you ‘git while the gitting is good,” and enjoy your month. After this year, June is back up for grabs—on the open market as it were.

But if you think you get to vote on who will get June next year, you might be disappointed. In the spirit of transparency of the Obama administration—the most transparent administration in the history of America—you will not get a “look-see” at the potential suitors for the month of Jun—just like this year. Nevertheless, I do have it on good authority that the jihadists are the front runners for next year—they will likely hold June through 2012.

Obama lists all that he has done for LGBTs, most of which already have existing protections for LBGTs:

I can see next year’s declaration for the jihadists:

“…I have ended harsh interrogations, eradicated the United States Military, instituted Sharia law, and kissed the hand of a Saudi sheik, and taken America’s protection from Israel…”

I like that Obama included “bi-sexual” in this edict. It sort of provides that “in” clause for us heterosexuals who might want to muscle in on June—in case you have a bad month elsewhere. 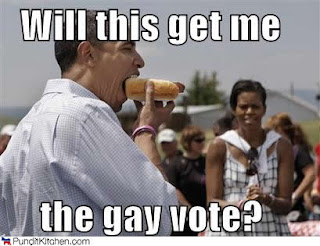 When the government starts giving you rights that you really don’t need or making “token” gestures, you have reached rock bottom. The LBGT has indeed taken a step backwards, though they likely won’t see it this way.

As for Obama’s proclamation, the transparency is obvious—solidifying votes. And LBGT will fall for it. So Obama will take all their money (and they can earn!), and turn the country over to people who would persecute them…but they can have a token month, just like blacks.

Unlike my gay, black brethren, I think I will just keep all twelve of my months. I like the way The Declaration of Independence put it: Life, liberty, and the pursuit of happiness. Works for me, as does The Constitution–at least as long as we are still allowed to have The Constitution—sort of.

Kevin Jackson is an author of four books in sales and politics, as well being the author of The Black Sphere blog. He has been published in Africa News and Hoovers. Visit Kevin at http://theblacksphere.blogspot.com or email him at [email protected]
The Black Sphere online magazine is at www.openzine.com/theblacksphere, and you can catch Kevin on The Black Sphere radio show every Thurs 9P-11P Central (times subject to change) http://blogtalkradio.com/TheBlackSphere
Facebook Twitter
Kevin JacksonJune 3, 2009
3 minutes read