My book is finished, so please pre-order (left side of the blog). See previous blog for an excerpt! I will do something really “cool” for the person who helps me sell the most books!

The industry that was” too big to fail” has ‘one foot in the grave and the other on a banana peel.’ Today GM announced that they can no longer sucker the American taxpayer to keep the lights on and filed for bankruptcy. Further auto industry news comes as self-appointed Chrysler CEO, Barack Hussein Obama has authorized the fire sale of Chrysler.The War on Achievement wages on. Twenty billion dollars invested in GM during “The New Dark But Not Alan Keyes Dark Ages,” and hardworking American taxpayers don’t even get t-shirts. Rumor is Obama plans on giving GM another fifty billion dollars to help with the bankruptcy…transition. That’s twenty billion less than Chrysler is supposedly got…to transition. Apparently transitioning into bankruptcy is where the money is, during the Era of Brown Underwear.

I can now see how idiotic an idea it would have been to—allow the free market system to deal with GM and Chrysler. I wonder what the outcome would have been had GM and Chrysler been left to their own demise? I’m guessing bankruptcy. It would appear that $100B ain’t what it used to be in propping up poorly run unionized companies. But who are American taxpayers to complain–it’s not our money, it’s Obama‘s! Don’t believe me, then compare you “Date Night” to his.

We can’t have the American taxpayers saving tens of billions of dollars in the Era of Brown Underwear. The chief architect of America’s new bankrupt economy, Obama would have to be twice as smart to be a half wit. Buy high, sell low is the Obama way. And that is exactly what Italian auto-maker Fiat has done. They will get the best part of Chrysler. The Italians always get all the sexy stuff.

The irony is that Fiat had to borrow $1B from GM a few years back—actually they borrowed the money from us—the American taxpayer. You might find it interesting that with Obama’s new budget we could have purchased everything produced in Italy in 2008 [Pricetag: $2.4T], and still have money to burn!

The whole “too big to fail” theory makes Obama the boy who cried wolf. Crisis management is what Rahm Emanuel calls it. To paraphrase the United Negro College Fund commercial: “A [crisis] is a terrible thing to waste.” And so is a presidency.

We are in the era of complete transparency, so they tell me. I believe them—because I can see right through this administration. As with all things involving The Illusionist, The Big Zero—there is more than meets the eye. And what bothers me the most is that the UAW appears to be happy, in fact giddy. You would think that with your industry about to blow up, you would hear more moaning and groaning. But they are not. I think I know why.

In case you are wondering where all those billions are going, I can tell you that one of my best friends who worked at Chrysler visited my home the other day. He had not a care in the world, and in fact had the demeanor of a guy who has the world by the short hairs. Chrysler’s bankruptcy hasn’t affected him in the least. Butter his behind and called him Biscuit—my buddy was on a roll.

During the push-pull on-again-off-again job schedule he had over the past months, he made out like a bandit. He drew 75% of his income from Chrysler, when not working. He had insurance that made up the rest. While not working, he got his hustle going—ironically, working on cars.

He recently got married—on the beach in Florida—leaving the resort to take a honeymoon cruise to the Bahamas. He bought her a very nice rock, and a matching necklace. However, his present to his new bride was that he had paid off all his bills—his debt being her chief complaint of him, while he was gainfully employed. When people lose their jobs, there is supposed to be crying and wailing, and uncertainty. But my auto-industry friends for the most part are not sweating what I would consider devastating news. 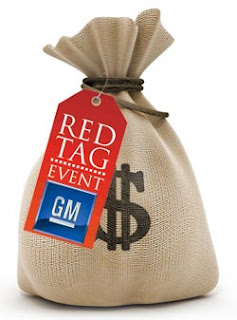 Where is the liberal outrage in a 100 year old industry being cannibalized? Michael “Less Is” Moore began his career by demonizing the closing of one GM factory in Flint, MI. His groundbreaking story featured the devastation to a small town when it lost its largest employer. For those of you smart enough not to waste your time watching a Moore “crapumentary,” I will cut to the chase. When a small town loses its largest employer, as my grandfather used to say, “It’s tough on old folks!”

Moore blamed GM for killing this small town, the idea being that GM had a responsibility to continue to lose money manufacturing autos in Flint. For Moore, the closing of that one plant was as if a meteor the size of Texas was headed towards Earth. Yet we don’t hear a peep from him, when the industry is practically destroyed. Let me guess: (1) He may be spending the millions of dollars he has made trumping up pseudo hypocrisies. Or (2) he is too busy feeding his face. Or both. Point: Moore knows when to not pick a fight.

Under ObamaNation, two American industry icons perch at the precipice, looking into the abyss. Unlike Obama reported about the economy, Chrysler and GM are not stepping back, but instead are doing a “louie,” taking the plunge.

Thankfully we have a pseudo-black president, so we don’t have to hear the liberals blame it on some white republican boogeyman. But don’t expect the liberals or media to point out the real boogeyman to us.

Kevin Jackson is an author of four books in sales and politics, as well being the author of The Black Sphere blog. He has been published in Africa News and Hoovers. Visit Kevin at http://theblacksphere.blogspot.com or email him at [email protected]
The Black Sphere online magazine is at www.openzine.com/theblacksphere, and you can catch Kevin on The Black Sphere radio show every Thurs 9P-11P Central (times subject to change) http://blogtalkradio.com/TheBlackSphere
Facebook Twitter
Kevin JacksonJune 1, 2009
4 minutes read
Don’t Miss Out!