Fight the LEFT and BUY my book The BIG Black Lie. I expose Democrats as racist and elitist, in a most humorous and satirical way. Don’t believe me, believe the reviewers on Amazon! Support new conservative voices!! 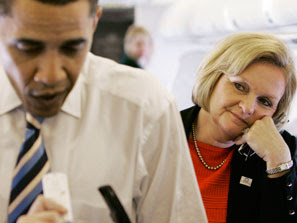 Senator Claire McCaskill (D) returned to her office recently after the incident where her staff denied access to blacks and other taxpaying citizens to her office…that we pay for. As a black conservative, I wish I could tell you that I was surprised and appalled. But I wasn’t. For me, it was just another reminder of racist Democrat policies of the past of denying black Republicans access to the political system. “Darn those uppity Negroes!”

McCaskill did however perform her own investigation into the incident, and offered what I consider to be a smart-ass apology to the constituents who wanted nothing more than to voice their concerns about the new propose healthcare legislation. In her “apology,” McCaskill offered the following from her own website:

“For the record, today I was able to figure out the allegation about my staff flipping off protesters at my St Louis office on Friday. There was only one male staffer at the office on Friday, and I knew he wouldn’t do that. He is an Iraq veteran, who handles almost all of our case work for our veterans. He is soft spoken and hard working and just not the type to lose his cool.”

I’m not surprised that McCaskill used a veteran as the potential scapegoat for the “flip off,” however she at least did not refer to him as an extremist, per Janet Napolitano’s instructions. Knowing how liberals operate, I’d like proof that McCaskill has a veteran working on her staff at all. Because Democrats are known to split hairs, let’s be clear that I’d like to know with certainty that this veteran is an American veteran and not Iraqi! She did say that he served in the Iraq war. Finally, I want to verify that he is a legal citizen of the United States…you just never know with this crop of Democrats crooks.

McCaskill next tells us:

“I still regret the way we handled the protest, and hope that all those that want to express themselves feel free to protest peacefully at our office anytime…While we did talk to 7 folks on Friday, I wish we could have greeted everyone at the beginning and brought part of the group in for a meeting right away.”

First, this was not a protest. This was citizens exercising their rights to meet with their representative. Next, Claire’s people did allow seven people in, and not ONE person of color was allowed in her office. Perhaps since there was one black lady on McCaskill’s staff in the building, McCaskill’s office had reached its quota for black people? So I and other blacks were relegated to “the back of the bus,” just like the days when racist Democrats were in control. If only blacks had worn “Yes We Can” buttons, McCaskill’s staffers might have allowed coloreds in; they wouldn’t have appeared so uppity.

“I think we learned from Friday and will do better in the future. In return I hope those that are protesting refrain from banging on the windows and doors continuously. Thanks so much.”

McCaskill is mad that taxpaying citizens are watching our money, and paying attention to issues. Amongst other things, Democrats hate informed citizens–and uppity blacks.

It should be noted that McCaskill didn’t apologize for calling the police on peaceful taxpaying citizens just exercising their Constitutional rights. Personally I find this disconcerting.

The incident hearkened me back to the ’60’swhen racist Democrats controlled the police. In those days they would have turned loose the German Shepards attacking Republicans supporting the civil rights of black Americans. Likely a disappointment for McCaskill’s office that they didn’t.