As I cleaned up the kitchen this morning, I discovered two large halves of half a watermelon sitting on the tile counter. My youngest had scooped out all the delicious red fruit and left the rest. No attempt to put it into the food waste container, sitting a few feet away. No attempt to toss it in the garbage. As I picked up the discarded shells, I thought, “No sugar ants swarming all over. Sure would have been covered in ants if I was still in Venezuela. All that sugary sweet watermelon juice…”

Mentally shaking myself, I offered up a grateful prayer that I was no longer living in the muggy tropical country where ant infestations were common. You could not leave food out on the counters for any length of time. Not unless you wanted ants—or worse. Unattended food was fair game for roaches, ants, bugs of all kinds. When humans with the power left the area, the vacuum was filled with opportunistic creatures taking advantage of the good stuff.

If you’ve been watching the news, you may have seen articles about Hugo Chavez and his declining health. He lied to the nation, and the world, when he declared himself healthy in order to run for the presidency. Now the ants are swarming in the vacuum left by his absence in Venezuela. Chavez has not been seen publicly since undergoing surgery in Cuba on December 11th. He’s been suffering from an aggressive form of pelvic cancer since June 2011. His health (or lack thereof) has been a closely guarded secret. Chavez has never been big on transparency; Being a dictator means you only let the ants see what you want them to see. You don’t leave the good stuff out; You save the wealth for your own private anthill compatriots.

His power lay with the Chavistas, the poorest of the poor in Venezuela, whose loyalty has been purchased from the coffers of companies he has nationalized and those who have worked hard for their keep. Chavez silenced most critics by nationalizing television stations, radio stations and causing many of his detractors to flee the country in fear of trumped up charges. He has made his cronies wealthy.

And now, the ants swarm.

Hugo Chavez is much like Hitler; Before his illness he created an US vs THEM mentality in the minds of his loyal supporters. Venezuelans vs the United States of America. Us vs The Great Satan. The US was going to invade their beloved Venezuela because they had oil—after all, hadn’t they done the same in the middle east? Chavez paid Chavistas to ‘train’ for the invasion. Regular citizens, marched around in units, ‘training’ for the coming invasion.

Now Chavez, possibly on a ventilator in Cuba, is absent on the eve of his inauguration.

“The official version of what is happening, is unsustainable,” the head of the main opposition party, Ramon Guillermo Aveledo party told news outlets. He urged the government to prepare for what is coming, instead of hiding the truth.

But hiding the truth is something Chavez and his cronies are very good at.

The Venezuelan constitution says that presidential elections must be held within 30 days if the president is dead, or absent. Hugo Chavez is indeed absent.

One night, as I returned to my home in Venezuela, I saw a line of black in the road, leading from the jungle across the street to my front yard. As I got closer, I saw that the black line was moving. Ants! Big fat leaf cutter ants were marching between the yard and the jungle. By the time I reached the front yard I could see that they had completely defoliated an entire bush and carted it off, piece by piece, into the jungle. All that was left was the wood of the plant, but without it’s leaves to work and sustain it, the bush was doomed to die.

Venezuela’s government and it’s economy has been chomped at by Chavez and his socialistic regime until people have to stand in lines to purchase the most basic necessities and even those are rationed. I received news from my friends there that they were giving Harina Pan, the cornmeal mix to make arepas, a mainstay of the Venezuelan’s diet, as Christmas gifts. It had become scarce and very costly. Chavez’s hatred of all things capitalistic has caused them to have to import many of the things previously manufactured in Venezuela. As a consequence, there are shortages and rationing. With Chavez in Cuba and possibly dying, nothing is improving for the Venezuelan people. 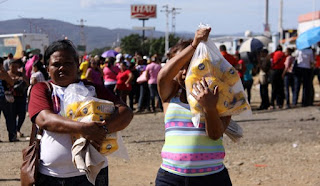 And so the ants swarm in the power vacuum.

Disodada Cabello has been reelected president of the Venezuelan Assembly—a post that could mean he would rule in the absence of Chavez. However, Chavez made his wishes known before he went under the knife, that he wanted his vice president, Nicolás Maduro, to be his successor. Tensions between the two ant hills are increasing, as the Chavistas swarm around. Cabello and Maduro embraced after the assembly vote, saying that they would never be traitors to the will of Chavez and that they were the ‘sons of Chavez.” 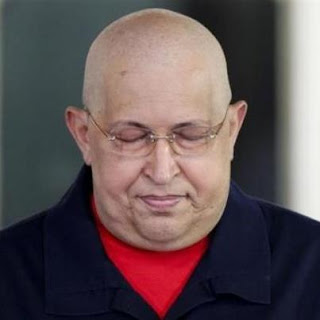 Comments from Venezuelan’s on the FaceBook page Noticias al Dia y a la Hora, are overwhelmingly dismissive of this ‘theatrical hug’, saying that both should watch for the knife in the back from the other. Meanwhile, the ants swarm and I wonder what will be left of my beautiful second homeland after the socialist feast is done.