The political-correctness crusaders can finally relax.

The loony left have been successful in their quest to make some Americans so hyper-sensitive, that if the image of a black person is anywhere within 500 feet of an actual chicken, a sign with a chicken on it, or worse yet, a sign advertising a sale on organic chicken, get ready for the offended to protest by turning over a stand stacked high with organic watermelons.

That is exactly what almost happened at an Upper West Side Whole Foods supermarket when Woody Henderson (no, not Harrelson) happened upon a sign advertising a one-day special for organic chicken at $1.99 lb.

Woody is the activist producer/host of the Time Warner Cable show “A Struggle for Justice,” and is founder and director of the Organization for Reunification & Rehabilitation of Children & Families (ORRCF).  ’Nuff said.
When not “struggling for justice,” Woody probably spends most of his time either impersonating Jesus in dreadlocks or on the lookout for politically incorrect supermarket ads.

After spotting the Whole Foods chicken sign, an outraged Mr. Henderson declared,“There are certain things that have been used to put down black people – watermelon, fried chicken.” Relax Woody, it’s just an organic chicken, and no one said anything about frying it.

Not to offend, but if you think about it, except when pulling the occasional rickshaw, even La Choy Chow Mein made a concerted effort to avoid having Chinese people in their commercials.

Nonetheless, organic or fried, one would think that an establishment that touts animal welfare and green standards and adheres to a whole-planet mission would be welcoming to the likes of “One Love” Bob Marley-lookalike Mr. Woody Henderson.  Maybe there is such a place, but it’s not Whole Foods.

Of late, Whole Foods seems to be on the Upper East Side liberal hit list, because on Woody’s Facebook page his ‘friend’ Phenice Arielle posted the following rant, complete with lots of words in ALL CAPS for emphasis and a picture of the Whole Foods organic chicken sale sign:

Last month WHOLE FOODS CEO John Mackey compared The Affordable Care Act to fascism. This month Whole Foods Market NYC ( Whole Foods Market ) goes FROM FASCISM TO RACISM with the sign Whole Foods chose to display on Feb 19th, 2013 depicting an obviously recognizable African American as being excited about Chicken (of all things) being on sale and noting its ‘Welfare Rating.’ *Ironically, the only thing to be excited about now is NOT SHOPPING AT WHOLE FOODS.

Ah ha!  This whole controversy has little to do with America’s first African-American president being associated with chicken and everything to do with anger over proud capitalist John Mackey expressing his opinion of Obamacare.  Although Mr. Mackey’s sentiment was 100% correct, he kind of deserves a hard time for attempting to appeal to the grass-fed patchouli-oil crowd.

Local residents and passing sign spectators agreed that the angry-looking man on the sign did resemble Barack Obama, but not everyone felt it was disparaging. For instance, Joseph Joshua registered his opinion by saying, “Obviously it looks like the president, but I don’t think it’s racist.”  Racist?  Come on, it’s not like they’re selling organic collard greens.

Actually, rather than a hungry black man unable to control his craving for organic chicken, the image did resemble an impassioned Barack Obama in the heat of social justice rhetoric. Then again, in an effort to make amends for speaking the truth about Obamacare, the signage could have been John Mackey’s wily way of paying homage to America’s first fascist president. 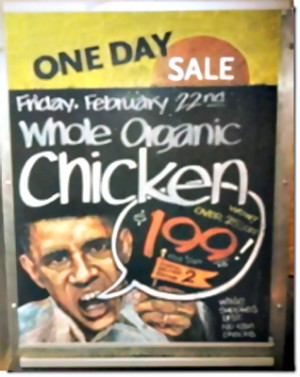 In an attempt to explain away the brouhaha, a Whole Foods spokesperson said store artists create a variety of pop culture imagery to promote sales and events.  But Austin-based comic book artist and former Whole Foods sign maker Paul Maybury lost his job at the store because a vegan shopper was offended by a Mr. T sign he had made that said “I pity the fool who don’t eat sirloin steak.”

Nonetheless, because the chicken sale drew complaints that the ad was offensive, the supermarket quickly responded and removed the sign that looked like Barack Obama.  Besides, Woody should know by now that the president prefers $100-a-pound Wagyu beef to $1.99-a-pound organic chicken.  Still, a Whole Foods spokesperson stressed, “There was no disrespect meant at all.”

As an aside, is it too late to complain about the message being sent by having an old Italian with a mustache depicted on a can of Chef Boyardee?

And speaking of canned ravioli, when Woody was doing his culturally sensitive investigative reporting, he must not have noticed the ‘First Cut Brisket: Uncured Corn Beef’ that Whole Foods was selling for St. Paddy’s Day, because it had a leprechaun on the package!  And is Mr. Henderson aware that in Madera, California, Whole Foods was selling Black Figs for $5.99 a pound, as well as Black-eyed peas?  And where the hell was Woody when Whole Foods was selling illegal-immigrant-offensive Mexican Limes?

In the end, Whole Foods’ “vision of a sustainable future means [with their help] our children and grandchildren will be living in a world that values human creativity, diversity, and individual choice.” Not so fast! Don’t forget we still have Woody on the hunt for organic chicken injustice!

This proves yet again that as far as the pouty flakes living on the Upper East Side are concerned, “human creativity, diversity, and individual choice” had better not involve a Whole Foods organic chicken sale sign with a black guy on it, or something.