While examining an article on www.alternet.org, I happened across a recurring theme in American politics: Mitt Romney was supported by white voters despite his mediocrity, and only because Barack Obama was (and continues to be) black, despite his exceptional nature.

I know the idea of white privilege, the bastard child of critical race theory, keeps gaining ground as time goes on, and it will be perpetuated as long as the media and their Democrat allies can sustain the narrative. The President seems to have set his “laser-like focus” on its preservation throughout his administration.

The reason I reject it is simple: I’m white, and it has purchased me no privilege.

I come from a divorced home, from low-to-middle class income, and have managed to list as my current education credentials (hold your breath): graduated high school in 1999. I don’t even know if “high school” should be capitalized. My wife’s family has a much more homogenous income spectrum, and she still manages to come from the lower end of it. Where the hell is our white privilege?

The truth is it ain’t out there. LPSDs (Liberals, Progressives, Socialists, Democrats) are falling more and more on the white privilege sword, and the continued cries of racism, for two very simple reasons. 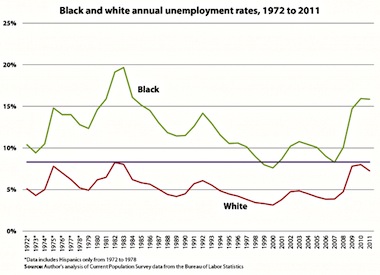 Oh sure, they play into the whole “white privilege” idea by talking about how black unemployment is above 10% for the better part of 50 years, but they fail to mention that, according to their own graph, President Obama has not had a better month of black unemployment than George W. Bush.

Or, to be more blunt: In terms of employment, President Bush was way better for the black community than President Obama has been. At its conclusion, the article tries to subtly blame this on the Tea Party (I’m not kidding), by blaming local and state budget cuts for the loss of black jobs in the public sector.

Second, President Obama has not let all of this economic misery go to his head. He seems to be taking Rush Limbaugh’s advice of choosing not to participate in a recession. Must be nice to have that privilege. Of course, every President has been given the privileges President Obama enjoys, and Bush took more vacations, so why do we even worry about what he does in his spare time? You have to admit, it’s a brilliant governing strategy: walk into the Oval Office and wonder aloud why the hell the country is not fixed yet, blame the Republicans in Congress, and hit the links.

President Obama is simultaneously a walking refutation of white privilege and a walking testimony to government’s excess in a time of scarcity for the rest of us. This is what “shared sacrifice” looks like, folks.

And during the State of the Union address, which I’m surprised he gave because it is a Constitutional obligation, he proposed a minimum wage hike to $9.00/hr. I don’t know how Wolf Blitzer kept it in his pants following that statement. A minimum wage raise is liberalism’s pincer attack. On the one hand, it helps secure union jobs by increasing the price of competition.

On the other hand, it helps keep the unemployed right where they are by increasing hiring costs. And who has the highest unemployment rate? Well, if the BLS is to be believed, it is black female teenagers. And who makes up the unions that this new protection tariff protects? According to a Cornell university study, a whopping 79.5% of union members in this country are white, and most are men. Ladies and gentlemen, I give you Crony Socialism .

Sasha and Malia Obama are not under attack here. They have done nothing wrong. They are black female teenagers, though. (Well, Sasha is a tween, to be fair) In typical liberal fashion, in typical Demographic Party fashion, and in typical Crony Socialism fashion, the President has made sure that their privileged existence will never face competition from anyone who manages, despite his policies, to better their economic circumstances.

I guess he’s just a family man, after all.