(by Tami Jackson and Kevin Jackson)

What happens when the government seeks to disarm those defenseless amongst us?

History has proven the disarming of citizens and peoples as a tragic first step toward subjugation, and even extermination.

Almost all Americans know of the Battle of the Little Big Horn, but fewer people know the details surrounding the horrific Wounded Knee Masacre. 14 days after Chief Sitting Bull was brutally shot, on December 15th, 1890, the US Army ordered the Lakota to disarm and then relocated about 350 Lakota Sioux to a camp at Wounded Knee Creek.

On the morning of December 29th, 1890, the Army officials again ordered all of the Indians to disarm. The military intent was to burn the weapons, but one lone medicine man cried for armed resistance. A shot was fired by some unknown gunman, causing the troops to open fire on the mostly unarmed Lakota. When the smoke cleared, 290 Lakota Sioux (including women and children) had been massacred and 33 soldiers died by friendly fire. 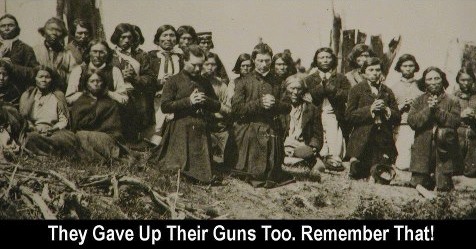 The government would like you to believe that guns are for hunting. Obama mentions this in almost all his speeches where he says he doesn’t want your guns. Government is just protecting everybody else, when they discuss limiting your rights to guns, cartridges or bullets. Gun advocates realize that there is a much more sinister history when it comes to guns.

Those who have guns make the rules. Pure and simple.

The Left points to recent school shootings as the need for gun control, ignoring other facts about guns. Forget that guns save lives daily, many more than are actually killed by firearms. So it’s understandable that the Left doesn’t want to go back in history to explain that a tyrannical government with guns is more dangerous than any enemy.

The law-abiding citizens of the United States must memorize the Second Amendment and remind those would-be gun-grabbers that they may NOT infringe on our rights! The Constitution guarantees that an armed populace is the safeguard against governmental tyranny!

Let us not forget the lessons of history: an unarmed populace can readily become an enslaved populace!