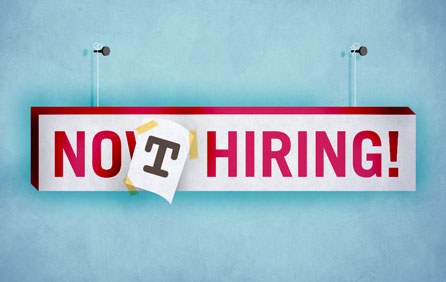 Telling you that there is uncertainty in the jobs market is like reminding you to BREATHE! When you have a president who would rather put 16M (and growing) on welfare, than address the real jobs crisis, you know that there will be no relief.

The latest Manpower report shows that only 23 percent of CEOs will be hiring over the next quarter, or put another way 79 percent won’t. I’d say that 23% is pretty close to Obama’s real approval ratings and the real unemployment numbers.

I wrote earlier that Obama signed the coroner’s report for the economy with ObamaTax kicking in Jan 2014. The 12-month forecast for job cuts underlies what’s happening in what should be the most robust quarter of the year from a hiring perspective. However CEOs remain pessimistic about Obama, as they should be. His attempt to cover up his incompetence by printing more money has a shelf life. The only quantitative easing is the delay in people finding out just how inept Obama and his administration is, as they pray for “hope” in the form of a silver bullet from the private sector.

Well there won’t be a Microsoft, Apple or Intel to bail these economic buffoons out, and Green Energy is delivering nothing but red ink. Obama says the more we “invest” in education, the sooner we will solve our problems, and that too is empty meaningless rhetoric that won’t create a single new job.

Why do you think the Democrats are not spiking the football over the new DOW highs? Nobody wants to own that inevitable fall, nor do they want to discuss the real inflation involved in those fraudulent numbers.

There is good news. There are lots of new businesses for preppers.