On occasion it becomes necessary for me to give a Liberal smackdown. Unfortunately I didn’t keep the entire thread, but this one should provide a laugh. I wiped out the troll’s first name, but the last name is the BUTT of the joke, pardon the pun. 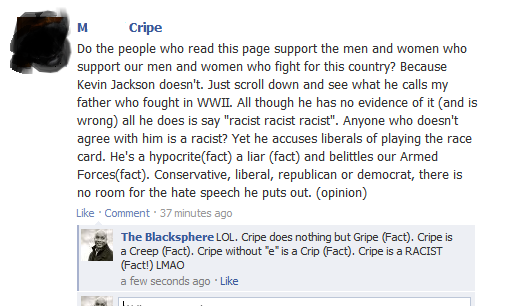 Next, Liberals are as useless as a pocket on the back of a shirt, which is why this guy has nothing to tout about his miserable life. Like most Liberals, this troll has to live vicariously through others, which in this case was the stupid Liberal troll’s father.

Instead of trying to convince me about HIMSELF, he chooses to use his father’s supposed war record to bolster his own standing.  I say “supposed”, because just because a Liberal says something, doesn’t make it true. For all we know, his father is Bernie Madoff–considered a war hero by Liberals.

Fictitious heroes are the mark of Liberals.