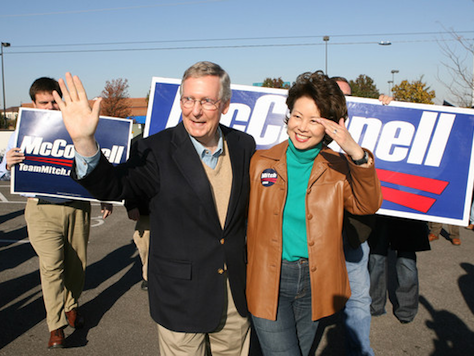 Don’t expect the racist Liberals to gen up much outrage over the treatment of Mitch McConnell’s Chinese wife, by the Liberal super PAC. For Liberals, it’s no big deal when one of them says that Kentucky should send a “real American couple” to Washington.Some Liberal pundits were quick to point out that it was only “one person” who made the comment, but that’s not the case, as others, including the daughter of a Democrat governor had said the same thing. The fact is, criticizing McConnell’s Taiwanese wife as “not American” is a Liberal talking point.

What should show people how TOLERANT McConnell is, now NOT RACIST McConnell is, for Liberals is something to make political hay of. This is because Liberals know they are the most intolerant people on the face of the earth.

The Liberals tried feverishly to find a racist at a Tea Party, actually sending them (LOL), but they couldn’t dim the spirit of the movement. And as with all things Liberal, they tell you who they are by what they accuse you of.

The Asian community needs to know just how vile and racist the Left is, and I suggest that they investigate the earlier Democrat platforms that discussed their take on Asians, before they cast their next votes.