I did an interview with David Shuster where he tried to ambush me on the idea that Republicans were vandalizing Democrat campaign offices. I disagreed and said that it was likely Democrats doing it and blaming Republicans. Shuster challenged me on why I believed Democrats were vandalizing their OWN offices. As it turned out, I was right. 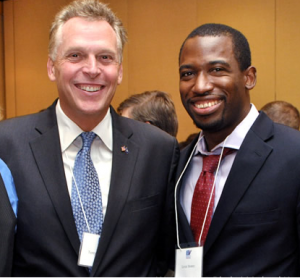 Levar Stoney, the deputy campaign manager for Terry McAuliffe’s campaign, admitted in 2006 that he lied to Milwaukee County detectives to protect a handful of Democratic operatives who were later convicted of slashing the tires of Wisconsin Republican Party vans on Election Day.

Stoney returned to Virginia after the 2004 election and took a position in the office of then-state Attorney General Creigh Deeds. He would later work as the political director and executive director of the Virginia Democratic Party. Stoney also worked on Deeds’ unsuccessful 2009 gubernatorial campaign.

Attempts to reach Stoney through the McAuliffe campaign were unsuccessful. The campaign did not return requests for comment.

Stoney’s work with McAuliffe goes beyond the realm of Virginia Democratic politics. He was until December the director of public and government affairs for GreenTech Automotive, the hybrid and electric vehicle company that boasts McAuliffe as its chairman.

GreenTech did not return requests for comment and clarification of Stoney’s work with the company.