Any American with an ounce of media savvy has seen the decline in dino-media: old, entrenched newspapers and magazines grow scantier by the week.

Thanks to New Media, millions of Americans can end-run the Main Stream Media and read more timely and more objective news from hundreds of sources. Rather than rely on Gannett or the NYT elitist and skewed “fairy-tales,” citizens can Google away and see for themselves minutes-old accounts at Breitbart, The Blaze, Fox News, PJ Media, Townhall.com, or even theblacksphere.net!

Larry O’Connor, Breitbart TV Editor, gives us the stats on the death-rattles of Old Media. 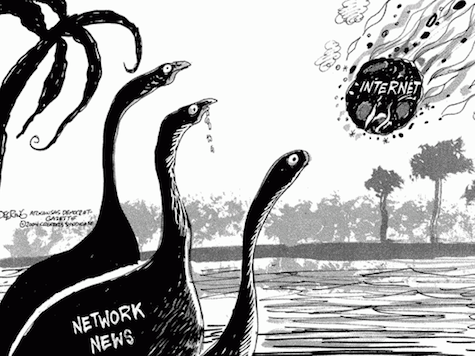