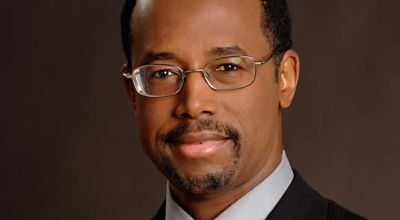 Bona fide terrorist Bill Ayers is welcomed in Wackademia with open arms, but pediatric neurosurgeon Dr. Ben Carson isn’t. Such is the insanity that exists these days in “education.”

Why does Johns Hopkins changing not want such an accomplished black man to speak? Because Dr. Ben Carson has an opinion on gay marriage. Exactly what that has to do with a commencement exercise at a medical school is unknown. But what isn’t unknown is that Wackademia and other Liberal institutions don’t like it when black conservatives have an opinion, particularly one that differs from the mainstream.

So what Dr. Ben Carson is not gay, and believes marriage is between a man and a woman. It’s not like he blew up a police station or was a member of a terrorist group.

The petitions began after Carson told Fox News Channel’s Sean Hannity, “My thoughts are that marriage is between a man and a woman. It’s a well-established, fundamental pillar of society and no group, be they gays, be they NAMBLA, be they people who believe in bestiality — it doesn’t matter what they are — they don’t get to change the definition.”

One of the petitions, quoted by The Hill newspaper, reads: “We retain the highest respect for Dr. Carson’s achievements and value his right to publicly voice political views. Nevertheless, we feel that these expressed values are incongruous with the values of Johns Hopkins and deeply offensive to a large proportion of our student body.”