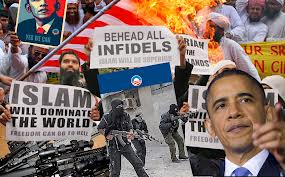 There is chatter out of the Middle East that groups affiliated with Al Qaeda are talking up the Boston Marathon bombings.

Given the Middle East’s feelings about America–recall they cheered as the Twin Towers were burning–Obama should not have much of a problem finding the culprits. The “bringing to justice” part should have all Americans shaking their heads.

Obama justice is not Reagan justice, if you know what I mean.

Middle East internet says that Gaza’s Jihadiya Salafia group is taking credit. This group supposedly represents Al-Qaeda in Gaza, but I doubt Obama’s “intelligence” crew has any organizational charts on his homies. It should be noted that Obama did not use the word “terrorism,” though the White House would later use the word.

It seems the only time Obama can find the use of “terrorism” appropriate is when it involves America-loving Tea Party and grass roots taxpayers.

Will America endure another Khalil Sheikh Mohammed, a farce where a terrorist gets better treatment in America’s justice system, than American citizens?

Obama’s administration will go down in history as the most corrupt and the most inept in America’s founding. And Liberals are to blame. Al Qaeda has good reason to brag about killing more American citizens–including an 8-year old boy–as they have carte blanche to do as they wish.

Obama’s lack of leadership provides unlimited “get out of jail free” cards to the most cowardly terrorists in the world. A coward empowering cowards.