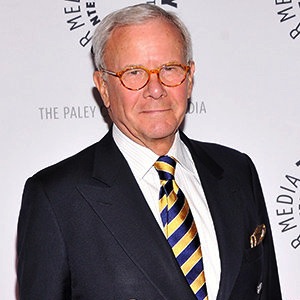 Tom Brokaw has decided to speak out against the media and perhaps the new White House as he revealed he will not attend this year’s White House Correspondents’ Dinner.

“Somewhere along the line, it began to freewheel out of control,” the renowned anchorman told Politico about the celeb-filled soiree, “and the breaking point for me was Lindsay Lohan.”

The trouble-making actress was invited as a guest of Fox News’ Greta Van Susteren at the 2012 dinner. Page Six’s Cindy Adams recalled how Lohan disappeared a few times to the bathroom for a cigarette and tipped a bathroom attendant a crumpled $100 and said, “You’re too old to be doing this.”

The dinner has been a tradition since 1920 for journalists who cover the White House and the President. However, Brokaw said that standards of the red-carpet fete have now fallen so low that his “daughter’s junior prom has more dignity.”

Finally a media person who finally sees what Conservatives have seen in the fraud of the Oval Office, and the suck-up culture who is cool with an empty suit leading the country.

How long will it take for the lamestream media to turn on Brokaw, and we hear that he is a racist? I’ll get back to you this, likely sooner than later.