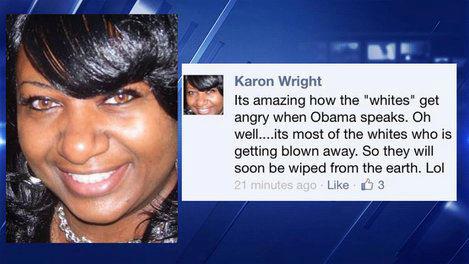 In case you have wondered how America got so racist against Conservatives, I have your answer. I have told whites that many Liberal blacks hate white people, and wish them ill will or worse. The “tolerant” Left doesn’t like discussing their racism, because their racism IS the racism they try to deflect onto Republicans and Conservatives.

Racism against Conservatives of all colors is part of the Leftist system. It is taught in schools, and it is encouraged in communities, and in families.

We have information that Karon Wright was a Grand Prairie ISD school counselor. She is the person from whom your kids would get their “life lessons.” Don’t expect the NAACP to speak out against this behavior, and there will be no media hoopla or White House Beer Fest. No, the Left will want to sweep this under the rug.

We are told that Wright got fired, but find out for yourself.