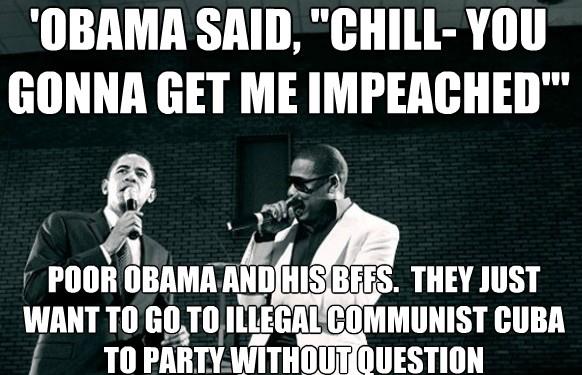 It seems that Obama is the person who authorized Jay-Z and Beyonce to go to Cuba.

This means Jay Carney lied, but then again…he’s good at that. Jay-Z produced a rap about his experience, and throwing a shout-out to Marco Rubio, his fans, and Obama.

I’m not surprised that Jay-Z dissed Marco Rubio. But what does surprise me is how easily he his dissed his “f’g dweebs,” and Obama. After all, Obama admits that if anybody knew that how Obama rolls–that is to say, allows access to him to be bought–well, Obama could get impeached. It just goes to show you that money doesn’t produce class. But then again, that’s what most Democrats prove.