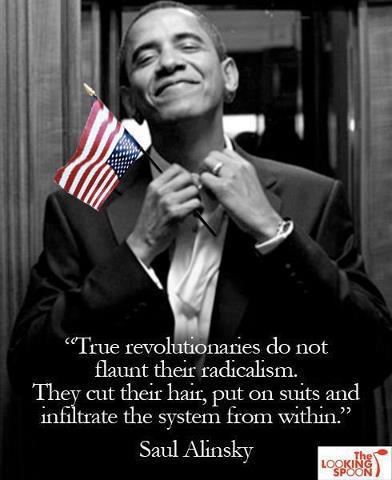 Too bad the Main Stream Media cared more about electing a black man who espoused their values than they did the truth–we might have known a little bit about Obama and his inspiration.

Saul Alinsky was both evil and brilliant. If you have any doubt of Alinsky’s abject nature, consider his quote in the preface of his book, Rules for Radicals:

Lest we forget at least an over-the-shoulder acknowledgment to the very first radical: from all our legends, mythology, and history (and who is to know where mythology leaves off and history begins—or which is which), the first radical known to man who rebelled against the establishment and did it so effectively that he at least won his own kingdom—Lucifer.

Consider also that Saul Alinsky was quite open about his embrace of, albeit evolved, Marxism:

Few of us survived the Joe McCarthy holocaust of the early 1950s and of those there were even fewer whose understanding and insights had developed beyond the dialectical materialism of orthodox Marxism.

Yes, Alinsky had the sinister audacity to call the McCarthy trials the “Joe McCarthy holocaust”! Never mind that there was a literal threat within America as the Communist Party was infiltrating universities and, to some degree, entertainment. Naming this time in our history a “holocaust” is to disdain of the real sufferers of the Nazi holocaust and should be repellant to all Americans.

Even worse, Obama admonished Israeli college students this year during his visit to their country that Israel “has the wisdom to see the world as it is, but also the courage to see the world as it should be.” In doing so, the president was quoting Saul Alinsky to those young Jews…a subversive and heinous, and obviously intended tactic.

A man’s character may be understood by those he strives to emulate: Obama emulates and follows Saul Alinsky, an evil, Marxist, power-hungry radical. Enough said.