Most Americans may not know (yet) that they narrowly avoided the disaster of the U.N. Arms Trade Treaty (ATT).

Purportedly, the ATT’s intended purpose is to regulate the high number of conventional weapons traded internationally each year, making it more difficult for them to be diverted into the hands of those who are intent upon sowing seeds of war and conflict. While the George W. Bush administration voted against a resolution that initiated the drafting process in 2006, the Obama administration has reversed that policy.

Ostensibly, UNATT is about regulating government-to-government arms transfers or direct sales by manufacturers to foreign governments. But the hidden agenda of the gun controllers is to craft treaty language that, while seemingly innocuous, has long-range implications for the use and ownership of guns here in America.

The real danger lies in vague, ambiguous stipulations gun-control advocates could later cite as requiring further domestic restraints. In other words, they hope to use restrictions on international gun sales to control gun sales at home.

Indeed, the theme underlying the negotiations is that the private ownership of guns is inherently dangerous.

Bolton, who knows the UN from the inside, further warns:

They may have waited too long, because their current frantic efforts betray their fear that Obama could lose in November, replaced by a pro-Second Amendment Romney administration. Significantly, a bipartisan letter signed by 58 senators has already rejected any treaty that seeks, however cleverly, to impose gun-control obligations on the U.S.

The gun-control crowd’s strategy of trying to do through treaties what it cannot accomplish in America’s domestic political process is not unique to that issue.

We have seen and will undoubtedly see many more examples of frustrated statists, unable to prevail in free and open debate, seeking to take their issues global, hoping to find more sympathetic audiences.

Stopping UNATT will be one clear way to send a message that such strategies are doomed to failure.

Thankfully, the US Senate narrowly passed a measure 53-46 that prevents the United States from entering into the United Nations Arms Trade Treaty. America’s Second Amendment proponents deserve to know the list of 46 senators who would cavalierly discard those precious rights:

Let’s be sure, with civil but firm correspondance, to make those lawmakers aware of how we feel about them playing fast and loose with our Second Amendment rights and US Sovereignty. Further, should they stay on their reckless path, discounting the Constitution, keep their names front and center and vote them out next election!

The future of America depends on the “eternal vigilance” of her citizens to safeguard her Constitution from all enemies, foreign AND domestic. 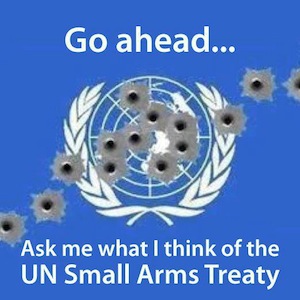