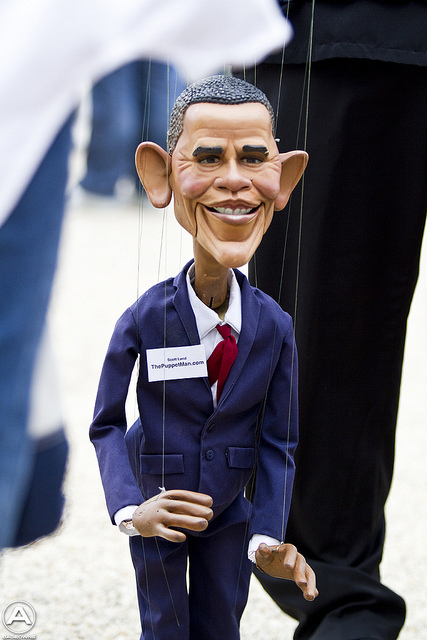 The more I think about it, the more it seems apparent that Obama is a Hollywood character.

I know people say it’s Soros who created Obama, and is pulling the strings, but I don’t really buy that. However, I do believe that somebody is manipulating the character, who ironically possesses no character.

Obama’s puppeteer knows that he is the most flawed political character in American politics.

For Obama’s handler, that’s the fun of Obama’s character: it’s similar to that of the likable mob boss, Tony Soprano. We are supposed to learn to understand Obama, and actually sympathize with him at times, all the while knowing that he is a crook!

As I pondered this notion, I began to understand Hollywood’s influence on politics, and to believe that Obama’s manipulator is closely tied to Hollywood. He may even have writers, people who figure out what Obama’s character should do next in the melodrama of American politics.

I read that the creator of the Tony Soprano character in The Sopranos decided to amp up Tony’s bad boy traits, in order to see if America would finally hate the guy. They didn’t. Tony Soprano remained the lovable mobster until the final episode.

The Left wants us to believe that Obama’s bad policies, bad ideas, bad character are endearing.