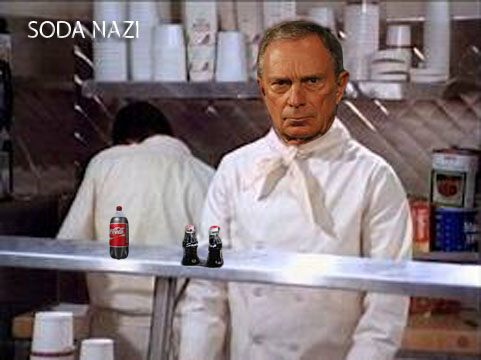 Since the Left doesn’t think we have a sense of humor, I’m editing this to note that WE KNOW THIS IS SATIRE! It was posted at the bottom of the article. For you Leftist, I say this to you, Conservatives know how to have a good laugh, you ignorant pukes! We laugh at you all the time, even if sometimes it’s about SATIRICAL STUFF!

Now that the satire has been RUINED…Enjoy!

You have to love it when those who wish to control get SCHOOLED! And that just what happened to New York Mayor Michael Bloomberg.

The owners of Collegno’s Pizzeria say they refused to serve him more than one piece to protest Bloomberg’s proposed soda ban, which would have limited the portions of soda sold in the city.

Bloomberg was having an informal working lunch with city comptroller John Liu at the time and was enraged by the embarrassing prohibition. The owners would not relent, however, and the pair were forced to decamp to another restaurant to finish their meal.

Witnesses say the situation unfolded when as the two were looking over budget documents, they realized they needed more food than originally ordered.

“Hey, could I get another pepperoni over here?” Bloomberg asked owner Antonio Benito.

“I’m sorry sir,” he replied, “we can’t do that. You’ve reached your personal slice limit.”

I plan to meet these owners of this restaurant the next time I’m in NYC, and shake their hands! [If only this story were true…TOUCHE Daily Currant!]