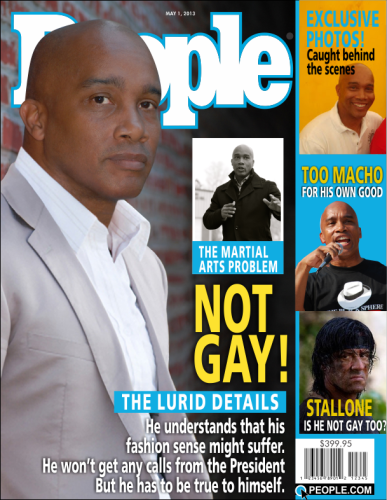 It has been a long time coming.

Tea Party activist and outspoken black conservative Kevin Andrew Jackson had thought about doing it for a while, but just couldn’t muster up the courage.  For 49 years he believed that his parents, grandparents, friends and the mother of his children all knew that he was ‘NOT gay,’ but lately he just wasn’t sure they believed him.

The questions started slowly. When pink for men was all the rage, Kevin wore it believing “real macho men are proud to wear pink,” but then his Aunt Gertie started looking worried and asking him questions like, “Kevin, honey, wouldn’t you be more comfortable in the blue shirt I bought you for your birthday?”

For some reason, things kept getting progressively worse.  For instance, when Kevin was standing in line near the pickle barrel at the local deli, a guy that resembled Doogie Howser kept moving closer and closer to him, mumbling something under his breath about salami.

At the gym, on more than one occasion, the female Zumba instructor asked Mr. Jackson to demonstrate the Belly Dance Hip Shimmy for the class.   And recently, when buying a goldfish for his six-year-old son, Collier, the pet store owner kept winking at him and nudging him toward the smaller furrier pets.

For Kevin, the last straw came when his drinking buddies spit beer all over the place after they burst out laughing when he told them that “I Kissed a Girl,” by Katy Perry, was his favorite song.  All things considered, that was when Kevin felt it was in his best interest to follow NBA not-so-great basketball player Jason Collins’ lead and take a bold step and ‘come out’ as ‘NOT gay.’

Jackson’s shocking announcement resulted in varied reactions. Rumored-to-be sexually conflicted John Travolta sent Kevin his condolences, and American Idols Clay Aiken and Adam Lambert were visibly shaken and refrained from comment.  Bruno Tonioli of ‘Dancing with the Stars’ telephoned Kevin and yelled wildly into the receiver, “Kevin, my darling, you do not know what you are missing.”

Angelina Jolie sent the up-and-coming Tea Party celebrity a virtual thumbs-up via her conservative dad Jon Voight’s email that said, “Kevin, despite rumors, you’ve given me hope to believe that one day I too can convince people that I’m ‘NOT gay.’”  Television notables Ryan Seacrest and Andy Dick echoed that sentiment.

From the world of politics, neither Barack Obama, Janet Napolitano, Elena Kagan, nor GLSEN founder/Safe School Czar Kevin Jennings have called to commend Mr. Jackson’s decision to come out as ‘NOT gay.’

Standing on the porch of his double-gated St. Louis, Missouri, home a liberated Jackson shared with People magazine that since coming out as ‘NOT gay’ his life has changed dramatically.  Kevin said one drawback is that “It’s been harder for me to find a spotter at the gym, and lately no one will share a ride with me at Park and Ride.”