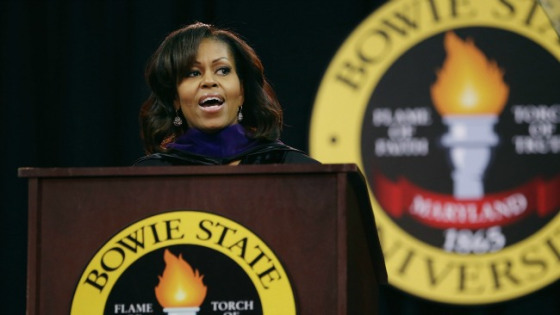 Holy Che-Z and Beyonce, Michelle Obama and her Liberal minions have created a culture among young blacks where the youngsters want to be rappers and ballers.

THEN, as with all things Liberal, their “truths” spiral into the inevitable lie of Liberalism.

During her speech to the students at Bowie State University, Michelle Obama advised:

“Be an example of excellence to the next generation.”

Sure, like her husband. The beacon of excellence as America’s first recognizably black, half-black president. What an inspiration HE is. Black kids may now know that they CAN be president of the United States. However, after watching Obama, who wants that job?

The white guys certainly made it seem a lot easier.

“Today, more than 150 years after the Emancipation Proclamation, more than 50 years after the end of ‘separate but equal,’ when it comes to getting an education, too many of our young people just can’t be bothered…Today, instead of walking miles every day to school, they’re sitting on couches for hours, playing video games, watching TV. Instead of dreaming of being a teacher or a lawyer or a business leader, they’re fantasizing about being a baller or a rapper.”

And in what might be the most incredulous part of her speech, Michelle Obama told graduates that they need to let go of the notion that getting an education is the same as acting white.

“Reject the slander that a black child with a book is trying to act white.”

No, the only thing a black kid can do that is “acting white” is to be a black conservative.