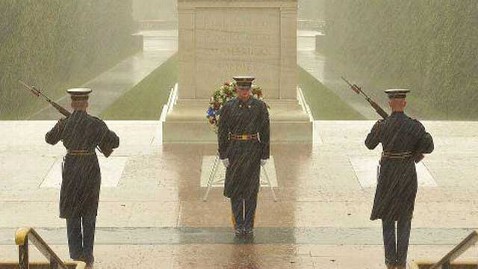 At least we now know where the Marines were who should have been protecting the embassy in Benghazi.

Marines are apparently at the beck and call of Barack Obama. The President could have simply asked these Leathernecks to him the umbrellas, but our Coward-In-Chief wanted them to HOLD his umbrella, because that’s what elitists do.

If Obama will call in the Marines to hold his umbrella, what do you think he would have done had HE been in Benghazi under attack?

As this graphic of Marines standing guard at the Tomb of the Unknown Soldier depicts, Marines have more honor than their so-called Commander in Chief. The truly honorable serve in whatever weather, and don’t need an umbrella to weather the storm.

*Editor’s note: Hear the thunder in the video? With all of the whoppers Obama has been telling…do you suppose he was getting nervous about lightning strikes? Hmmm…