Who knew British royal had ties to Dobby the House Elf? 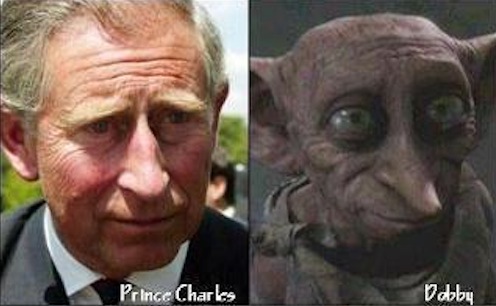 Prince Charles Prince of Wales (Charles Philip Arthur George,[fn 1] born 14 November 1948), is the eldest child and heir apparent of Queen Elizabeth II. Known in Scotland as Duke of Rothesay and in South West England as Duke of Cornwall, he is the longest-serving heir apparent in British history, having held the position since 1952.

Give Prince Charles a few more decades with no Oil of Old Lady and the resemblance may be even more uncanny!

(*Dobby  was a house-elf who served the Malfoy family. His masters were Dark Wizards who treated him cruelly. In 1992, he tried to warn Harry Potter of the plot to have the Chamber of Secrets reopened which he came to know via the contact between his masters and Lord Voldemort. Dobby kept hurting himself in numerous ways, e.g. Ironing his hands, and hitting his head against a lamp.)