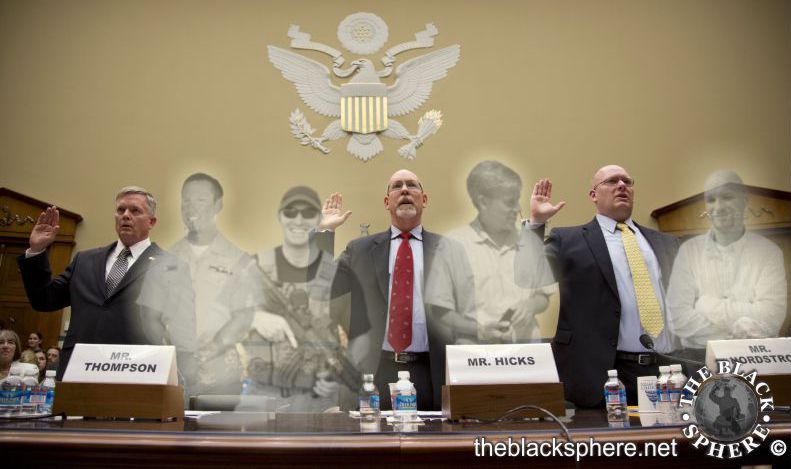 The Benghazi Whistleblowers — Gregory N. Hicks, the deputy chief of mission at the U.S. Embassy in Libya at the time of the Benghazi terrorist attacks; Mark I. Thompson, a former Marine and now the deputy coordinator for Operations in the agency’s Counterterrorism Bureau; and Eric Nordstrom, a diplomatic security officer who was the regional security officer in Libya, the top security officer in the country in the months leading up to the attacks — did their part to honor the Fallen Four of Benghazi.

Now it’s time for America and her elected officials to pull their weight and expose the Benghazi coverup. It’s time to out those responsible for the orders to stand down, and all who opted to disseminate the fabrication that the attacks on the compound were the result of an organic reaction to a 6 month old, obscure, anti-Mohammed Youtube video.

As I wrote last fall:

What every American should demand to know is: who decided NOT to approve further assets in Benghazi and who disseminated the ridiculous “YouTube hurt their feelings” story. Ambassador Stevens, Glen Doherty, Tyrone Woods, and Sean Smith died a preventable, brutal death as a result of gross inaction or oversight. The families of those 4 brave Americans deserve explanations. Americans, their troops, and the 11,500 US Citizens working in official capacity around the globe deserve to know what actions have been taken to safeguard our people and interests, especially in Libya, Somalia, Syria and Egypt.

39 years ago the American media had a feeding frenzy with the Watergate hearings, led by Bob Woodward and Carl Bernstein. The scandal concerned burglaries and wire-tappings at the DNC Headquarters at Watergate. The media would not leave the illegal event alone until everyone was questioned and prosecuted–many involved served prison time and President Nixon resigned. Again, the crime included burglaries and wiretaps, and then the cover-up of the illegal activities.

39 years later, the MSM is scoffing at Benghazi-gate and declaring any serious investigation “politicizing” to effect an outcome in the presidential election. The Media must be strong-armed by the citizenry into right action. Benghazi resulted in the slaughter of 4 Americans: not just lying, not just cover-up! This is a far graver situation. And you bet it should effect the outcome the presidential election! If President Obama denied assets to Benghazi, or knew of the denial of assets, he’s implicit in the murders. If the President did not know of the Libyan attacks leading up to 9/11, and did not know of the requests to extend and augment the SST, his ineptness and ignorance is so extreme as to disqualify him to be Commander-in-Chief.

President Obama imagined himself an enlightened ruler, with enlightened policies which he was convinced would endear America to Middle Eastern countries and calm down their nests of extremists. Hence, he built his foreign policy around his vain imaginings, and in so doing, endangered Americans. The honor of Chris Stevens, Glen Doherty, Tyrone Woods, and Sean Smith demands answers.