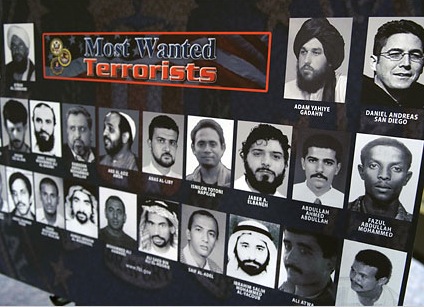 Would it surprise you to learn that Muslims lead the FBI Most Wanted terrorist list? And by a wide margin. 30 of 31 listed on the most wanted terrorists list are in fact Muslims.

There is a surprise…

Leave it to the two black guys in charge to make sure that the first name on the list is white. At least he “looks” white, though Daniel Andreas has a Greek name. Who knows what we will find out about Andreas should we investigate further.

In defense of the others, they all just have “Arab names,” so in the spirit of tolerance, they may not all be Muslims. They are all terrorists, however.

So the next time you are going through TSA, you might take the list of terrorists, and tell them that you (1) don’t have a beard, and (2) you have a colonial name, or a slave name if you’re black.