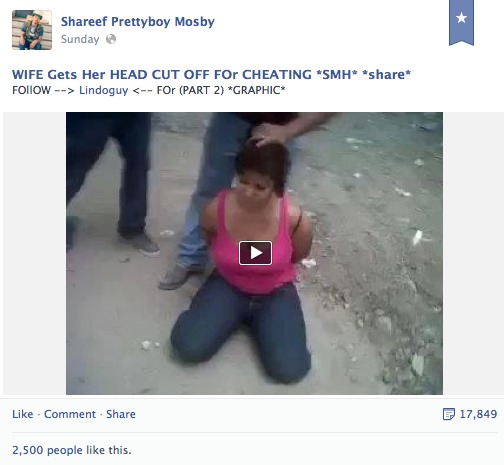 Facebook finally removed the video of a Muslim woman getting “Marie Antoinetted,” but it took some cajoling by the public at large. The same group that will take down almost anything pro-gun or anti-Obama and who have allowed some of the most vile anti-Jewish sites on the internet, at least found their heads on this one (pardon the pun).

We have posted the graphic only. You can find the link where the video of this woman being beheaded, as it does exists. Most say that the video is not a fake, and one thing is for sure, and that is Muslims behead people publicly (remember Nick Berg?), particularly women who they allege committed adultery, as was alleged of this woman.

In her “religion” all it takes is an accusation from a man to make it so. Funny that Islam is the religion the Left so vehemently wants to protect and usher into the U.S.

If Conservative men had a war against women, we would all support Islam, because let’s face it: Islam is a MAN’S religion! Multiple wives, temporary wives…wives who are essentially slaves to their husbands.