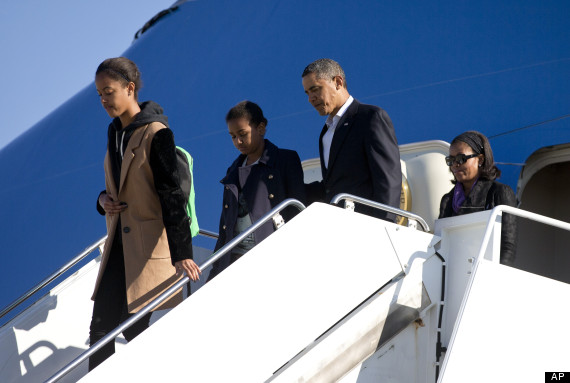 Pardon the pun, but $100M is chump change to the man who gave us “change we can believe in.”

I don’t begrudge any president down time, and certainly encourage time with one’s family. But when America faces it toughest economic challenges EVER, should Obama spend $100M to gallivant around the world? In a word…Skype!

Washington — When President Obama goes to sub-Saharan Africa this month, the federal agencies charged with keeping him safe won’t be taking any chances.

Hundreds of U.S. Secret Service agents will be dispatched to secure facilities in Senegal, South Africa and Tanzania. A Navy aircraft carrier or amphibious ship, with a fully staffed medical trauma center, will be stationed offshore in case of an emergency.

Military cargo planes will airlift in 56 support vehicles, including 14 limousines and three trucks loaded with sheets of bullet­proof glass to cover the windows of the hotels where the first family will stay. Fighter jets will fly in shifts, giving 24-hour coverage over the president’s airspace, so they can intervene quickly if an errant plane gets too close.

The elaborate security provisions — which will cost the government tens of millions of dollars — are outlined in a confidential internal planning document obtained by The Washington Post. While the preparations appear to be in line with similar travels in the past, the document offers an unusual glimpse into the colossal efforts to protect the U.S. commander in chief on trips abroad.

Any journey by the president, such as one scheduled this week for Northern Ireland and Germany, is an immense and costly logistical challenge. But the trip to Africa is complicated by a confluence of factors that could make it one of the most expensive of Obama’s tenure, according to people familiar with the planning.

The first family is making back-to-back stops from June 26 to July 3 in three countries where U.S. officials are providing nearly all the resources, rather than depending heavily on local police forces, military authorities or hospitals for assistance.

I know Obama considers all of this “stimulating the economy,” but when people are suffering to the degree that Americans are, this trip is extraordinary. It’s even more distasteful, given the number of vacations this family has taken, since Obama’s coup.

Or Republicans might get black people to consider their own vacation plans in comparison to Obama’s. It’s nice to live vicariously once in a while. But there comes a point where jealousy can kick in.

Anybody got the total amount Obama has spent on his vacations, his wife’s dalliances, his daughters?