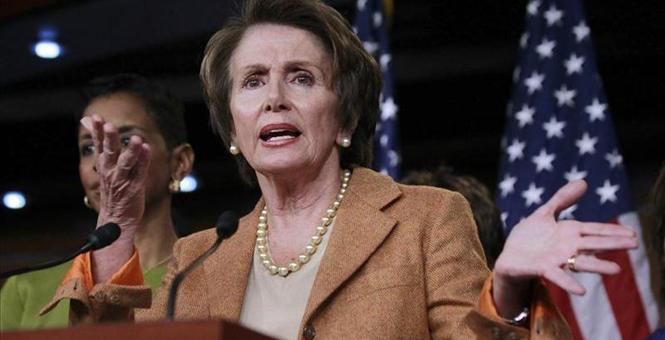 Could it be that Nancy Pelosi’s $20,000 Tahitian pearls were too tight? Either that, or the House Minority Leader had her oxygen cut off by the ponytail of surgeon-stretched skin that she hides under her coif constricting the blood flow to her brain.

Clearly, since being demoted the San Francisco Grandma must miss swinging around her huge gavel. Therefore, every time she opens her yapper she exploits the opportunity and proceeds to smack America over the head with a sledgehammer of stupidity.

Still, whenever the former Speaker bares her dentures, one does learn a lot.  This time while pitching bills that would keep a bankrupt government in the job of subsidizing student loans and federal support for jobs, what Nancy had to say certainly proved that when it comes to intellect, Mrs. Pelosi is what’s in need of a subsidy.

On her latest foray into farcicality, Ms. Nancy said this:  “To some of us the role of government is about doing things for the American people to help them reach fulfillment.”  Reach fulfillment?

Nancy saying stupid stuff is not news to anyone who’s ever heard her speak. Remember when Nancy spoke at the Asian American and Pacific Islanders Summit on Capitol Hill in 2010?  That was when the former Speaker informed the ethnically Asian group that she viewed Obamacare as an “entrepreneurial bill.”

Pelosi said the ‘Unaffordable We Don’t Care Act’ was:

…a bill that says to someone, if you want to be creative and be a musician or whatever, you can leave your work, focus on your talent, your skill, your passion, your aspirations because you will have health care.

In other words, go strum your guitar, join a dance troupe, and spend a couple of years learning to juggle, because the government will cover your sorry ass.

And Ms. Pelosi didn’t stop with her “fulfillment” comments either. She also complained that while Democrats push for more spending to create jobs, Republicans are seeking restrict abortions beyond 20 weeks.

Restricting late-term abortion must really bother Nancy, because mentioning it in the same breath as job creation reveals that in her quest for “fulfillment’ she’s really just making sure fiends like Leroy Carhart and James Scott Prendergraft have plenty of work.

Devout Catholic mantilla-wearing, Holy Communion-receiving abortion advocate Nancy Pelosi also pointed out that asking questions about late-term abortion indicated that the reporter doing the asking had an “agenda” and was “savoring” asking a question about a subject Mrs. Pelosi considers “sacred ground.”

Nancy explained it this way: “For [the Republicans] to decide to disrespect a judgment a woman makes about her reproductive health is reprehensible.”

In other words, in Grandma Nancy’s world, slaughtering unborn babies right up until they’re actually exiting the womb is what she defines as “judgment…about reproductive health.”  But then again, this is the same woman who defined Obamacare as “entrepreneurial” and bankrupting the American economy as “fulfillment.”

So there you have it. Democrats let Nancy Pelosi out of her pen to promote government spending and what Americans got was a double dose of geriatric dementia.

To sum up, Nancy Pelosi advocated for government taking and spending taxpayers’ hard-earned money on frivolities she defines as “fulfillment” and defined late-term abortion as “sacred ground.”