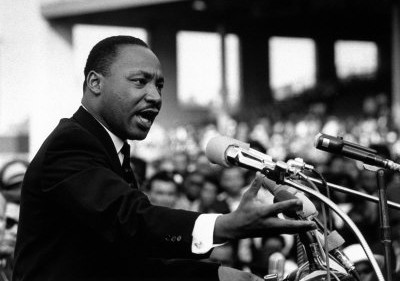 People who have studied enough US history can make sense of the current situation in America.

And such is the case in this article that discusses the Federal government’s illegal surveillance of American icon, Dr. Martin Luther King, Jr.

Overall, 56 percent of Americans consider the NSA’s accessing of telephone call records of millions of Americans through secret court orders “acceptable”, according to the poll.

But this posture among blacks is curious given the impact of the surveillance state on the civil rights movement. MSNBC’s Chris Hayes brought up this point during his Tuesday show, describing how Martin Luther King was harassed by the FBI.

The next time some Liberal, particularly black Liberal, says that government persecution, i.e. mining of data, or intimidation by the IRS is nothing, remind them of the fact that the FBI routinely monitored Dr. King, and tried to use the information to intimidate him.

It was a LIBERAL government run by JFK who allowed this to happen. And don’t forget that his brother was the Attorney General.

We find history repeating itself in America: the country is being run by two “brothas.”

The other parallel is both sets’ of Democrats relationship to the mob. The Kennedy’s had the Mafia, and Obama and Holder have the Chicago Mob.