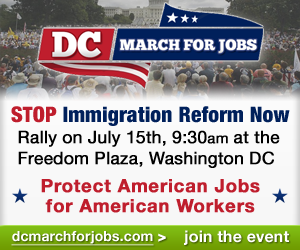 The Black American Leadership Alliance (BALA) is planning a protest march in DC on July 15th.

Recognizing the effect amnesty of 12 million illegal aliens has on jobs in the black community, BALA has scheduled a protest march to the Capitol in DC on July 15th. BALA hopes to bring attention to the sky-high unemployment rate in the black community and the disastrous effect the proposed immigration legislation would have on the jobs market.

A letter from the BALA to Congress reads:

We write to express our serious concerns with Senate Bill 744. Given the fact that more than 13% of all blacks are unemployed – nearly double that of the national average, it is our position that each Member of Congress must consider the disastrous effects that Senate Bill 744 would have on low skill workers of all races, while paying particular attention to the potential harm to African Americans.

Credible research indicates that black workers will suffer the greatest harm if this legislation were to be passed. We are asking that you oppose Senate Bill S.744 because of the dramatic effect it will have on the availability of employment for African American workers.

Many studies have shown that black Americans are disproportionately harmed by mass immigration and amnesty. Most policy makers who favor the legalization of nearly 11 million aliens fail to acknowledge that decades of high immigration levels has caused unemployment to rise significantly, most particularly among black Americans.

They further fail to consider how current plans to add 33 million more legal workers within ten years will have an enormously disastrous effect on our nation’s jobs outlook. With respect to African Americans, well respected researchers from some of America’s most venerable universities have found undeniable links tying large-scale immigration in the U.S. to declining rates of employment for America’s black citizens.

And closes with a powerful call to action:

The Black American Leadership Alliance is calling upon the Senate Gang of Eight and those Members from states having the highest rates of black unemployment to recognize the devastating effects amnesty and mass immigration has on low skilled workers, particularly those in the black community.

Secondly, we implore each Member to fulfill his or her duty to the millions of Americans struggling to find work by opposing amnesty and supporting policies to reduce overall levels of legal and illegal immigration.

The Black American Leadership Alliance letter is signed by:

Charles Butler
Veteran Host of the Take with Charles
Butler

Here’s hoping BALA’s July 15th protest march are supported by conservatives across the nation: this is a positive event which could yield great benefits for black communities. The Black American Leadership Alliance, unlike the President, does not promise free gas, healthcare or cell phones.

BALA strives to create an environment where black Americans can find employment and hopefully something infinitely more precious than a cell phone: self-respect and pride in self-reliance.

To participate in the July 15th protest march or for additional information click ProtestInDC.