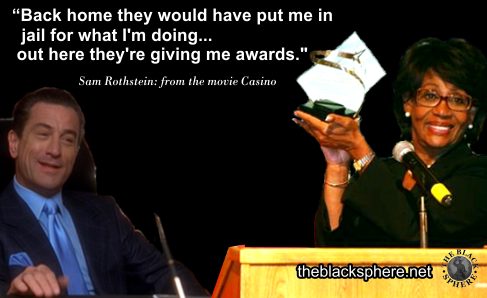 California’s Representative (D) Maxine Waters, former chair of the Congressional Black Caucus, has a less than cerebral and ethical reputation.

Remember her claim that, should the sequester be enacted, 170 million people would lose their jobs? The problem was, there were only 155 million workers in America. But of course the MSM let it slide.

It seems Ms. Waters can say or do anything with impunity. Big lies, little lies. Never mind.

1. Tea Party hell:  In Inglewood, Calif., Waters went after the Tea Party, telling a group of her constituents (many wearing purple SEIU T-shirts): “I am not afraid of anybody. This is a tough game. You can’t be intimidated. You can’t be frightened. And as far as I’m concerned, the Tea Party can go straight to hell.”

2. Walk the plank: During her August 2011, “We’re getting tired” tirade, Waters also went after the opposition in the debt-ceiling debate: “We were basically held up in raising the debt ceiling until they got all of those budget cuts they demanded. We didn’t raise any revenue, and they didn’t close any tax loopholes. I believe the Democratic Party and the President of the United States should not have backed down. We should have made them walk the plank.”

4. Outrageous flag-waving: After the health care bill was signed in April 2010, Waters denounced flag-waving at a Tea Party rally. “I was amazed. I really was. I didn’t say anything to anybody. I just watched-the Republicans were out there-they were having a great time. They were laughing, they were waving the American flag, they were egging them on, and I thought that was outrageous behavior. I really did.”

5. No crisis at Fannie Mae: As a senior member of the House Financial Services Committee, Waters played a key role in allowing Fannie Mae and Freddie Mac’s reckless actions that led to the housing meltdown. Here is Waters, at a 2004 congressional hearing, (and yes, that is the same “Frank” Raines that vastly overstated Fannie Mae’s earnings in order to receive $90 million in bonuses). “We do not have a crisis at Freddie Mac, and particularly Fannie Mae, under the outstanding leadership of Frank Raines.”

6. Right to anger: Way back in 1989, Waters was quoted saying how angry she was, and she has been angry ever since. Here are those 1989 remarks: “I have a right to my anger, and I don’t want anybody telling me I shouldn’t be, that it’s not nice to be, and that something’s wrong with me because I get angry.”

7. White power: Racial politics are always front and center for Waters, as evidenced by this quotation from a 1993 interview with the Los Angeles Times: “Policy, for the most part, has been made by white people in America, not by people of color. And they have tended to take care of those things that they think are important. Whether it’s their agricultural subsidies, or other kinds of expenditures that are certainly not expenditures for poor people or for people of color. And so we have to band together and keep fighting back.”

8. Rodney King rebellion: During the “Why can’t we all just get along” riots in her congressional district, Waters excused the wonton violence, as her constituents were intent on burning down the city. The Los Angeles Times quoted her saying: “If you call it a riot, it sounds like it was just a bunch of crazy people who went out and did bad things for no reason. I maintain it was somewhat understandable, if not acceptable. So I call it a rebellion.”

9. Schedule a meeting: With the financial crisis looming, Waters was mostly worried about a bank that her husband had a financial stake in. Here, she admits that she contacted the Treasury Department on behalf of OneUnited Bank officials, actions which prompted a congressional ethics probe: “I followed up on the association’s request by asking Treasury Secretary Paulson to schedule such a meeting.”

10. Liar, thief: For those liberals who decry harsh conservative attacks on President Obama, let’s hearken back to 2005 and listen to Waters’ comments on President Bush and Vice President Dick Cheney: “The President is a liar. Dick Cheney, the chief architect of the Big Lie, is not only a liar, he is a thief.”

With the Main Stream Media eating out of Obama’s hand, and adoring him and any other fellow Obama-sycophants, Rep. Waters gets a pass every time.