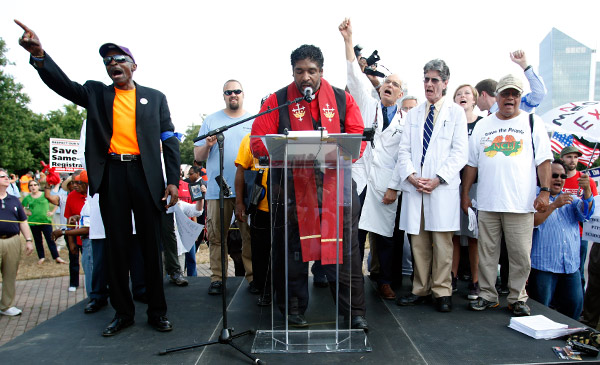 On April 29th, 17 of the North Carolina chapter of the National Association for the Advancement of Colored People (NAACP)’s Moral Monday protestors were arrested for failure to disperse when asked by the General Assembly police, and also were charged with disorderly conduct and trespassing.

“Moral Monday” is supposedly a protest against the North Carolina policies championed by the Republican governor and legislature.

However, the NAACP turns a deaf ear and blind eye to the factual history of race in North Carolina politics.

As Bill Randall of the Washington Times Communities writes:

The liberal left (NAACP, MSNBC and others) are seemingly hell-bent on categorizing the Republican majority in the North Carolina General Assembly as racist proponents of segregation and Jim Crow. We would do well to recall North Carolina’s history after the Emancipation Proclamation in 1863.

In 1868, Blacks were first elected to the General Assembly (fifteen representatives and two senators) in the Republican Party (which was the original anti-slavery party). But after Democrats consolidated power in the late 1890s, no Blacks were elected again until Henry Frye (a Democrat) in 1968.

In a not surprising move, MSNBC host Melissa Harris-Perry noted:

“if you thought you had your hands full with ‘Moral Mondays’, get ready for ‘Witness Wednesdays.’ You may want the protesters to go away governor, but they are just getting started. And so are we.”

MSNBC siding with a radical, leftward agenda? No! By now Americans fully understand that Main Stream Media (MSM) is not about true journalism–that is to say holding everyone’s feet to the fire. Rather, MSM is actively covering and promoting an activist, leftist world-view.

There are two points to remember here. First, the problems of North Carolina didn’t suddenly appear in 2011 when the Republicans took over, yet the NAACP and liberal press never seemed terribly concerned until Republicans got their hands on the levers of power.

Second, the members of the North Carolina General Assembly were elected to their seats; they were not appointed by the NAACP or any other group, and they are under no obligation to cater to the demands of the NAACP.

Voting rights: The NAACP believes that requiring voter identification will amount to a poll tax and would disenfranchise thousands who would be discouraged from voting because of the requirement.

The integrity and security of our election system depends on the integrity and validity of personal identification. The new legislation will not place a financial burden on any citizen, and presenting ID in order to vote (ID that the state will provide free of cost to anyone who needs it) would be no more of a hassle than the requirement to show identification to buy liquor, guns or a car. Without it, we revert to the bad old days where politicians can walk through cemeteries thanking the the residents for their votes.

Health Care: Barber believes that the GOP majority wants to deprive citizens of their inalienable right to health care (it’s there in the Constitution, with the inalienable rights to Prada shoes, vacations and internet access). Any attempt to limit the provisions of ObamaCare is a first step on the slippery slope to slavery.

The oxymoronic Affordable Health Care Act (ObamaCare) is anything but quality, affordable health care for all. Despite the most aggressive and biased media campaign in memory, fewer than half of all Americans believe that ObamaCare is good for our nation. The NAACP is either naïve or willingly suppressing the fact that ObamaCare will usher in rationing of health care, as happens in Europe.

The Republican majority in the North Carolina General assembly is remaining focused on doing the job that the people elected them to do. Many admire their character, resolve and fortitude in representing the will of the people. Not surprisingly, the Liberal Left loathes their actions.

Jobs: We can search high and low without substantiating. Barber’s assertion that the Republican majority in the General Assembly will suppress or eliminate private sector jobs. It is possible that he is alluding to a reduction in the payroll of state employees, but his position is very vague.

If you remember Economics 101, there are two things government can do to help create jobs in the private sector (which is the only place where real wealth is created): reduce burdensome taxation, and eliminate unnecessary regulations that stymie business effectiveness and growth.

The end game of Moral Monday?

The NAACP and Reverend William Barber want North Carolinians oblivious to the true history of race relations and the true role of responsible government within their state.

Those who wish for opportunity must sow an economic climate for prosperity.

And true economic prosperity is, as Republicans throughout America’s and North Carolina’s history have demonstrated, a result of less government and more color-blind legislators.