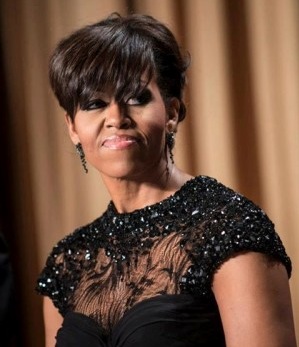 Packing up her Svengali bag, Schake is heading to the private sector as chief communications officer at L’Oreal USA, where she’ll head media, government relations, and philanthropy. Kristina is the woman credited with transforming $10 million vacationer, Michelle Obama, into a relatable Twittering, Target-shopping, mom-dancing gardener.

As 76% of those who live paycheck-to-paycheck fret over where to get $20,000 a year to pay for that Obamacare premium, and right after the Obamas’ return from their $100 million African outing, Maria Cristina “MC” González Noguera will take up residence in the East Wing.

MC will join Michelle Obama’s staff as Special Assistant to the President and Communications Director to America’s very own Bronze Goddess, Michelle Obama.

The new hire will work out well because not only does she arrive just in time to influence how Hispanics view the first lady, but more importantly, whether she’s globetrotting and sleeping in $4,000-a-night suites or just in the public eye, when encouraging Americans to fork over that pedazo del paste, a first lady has got to look her best.

That’s why having MC on staff is a major plus.  Hired to advise and direct communications, Ms. González Noguera can also double as an adjuster of Mrs. Obama’s “full-on, all-out diva” false eyelashes.  After her stint at Estée Lauder, she can probably blow out a mean set of bangs and make ethnically astute recommendations on the proper height of Mrs. Obama’s famous eyebrow arches that hide under those bangs.

Moreover, while Americans are shaking pennies out of their kids’ piggy banks, MC can teach Michelle how to make rice and beans, get her a gig on the cover of Latina Style, and enhance her image with millions of newcomers on the pathway to citizenship by casting Micaela Obama in a recurring role on a relatable Univision telenovela.