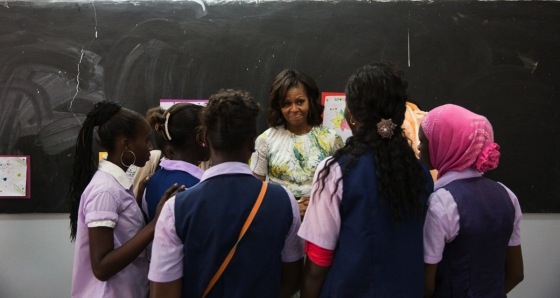 Michelle Obama is first lady of the United States of America and yet it seems that she’s searching high and low for an identity – desperate for a place to fit in.

It started after 15-year-old schoolgirl Hadiya Pendleton of Chicago was shot dead standing in Vivian Gordon Harsh Park talking with friends. Michelle Obama rushed to Chicago to attend the girl’s funeral, had her parents Cleo and Nate sitting in the Special People Sky Box with her at the State of the Union, and then told Hadiya’s story when pushing gun control at a conference on youth violence hosted by Chicago Mayor Rahm Emanuel.

It was there that Mrs. Obama said, “Hadiya’s family was just like my family. Hadiya Pendleton was me. And I was her.”

Just recently, on a trip to the Emerald Isle, while attending a special Riverdance performance at the Gaiety Theatre in Dublin, Michelle Obama again told an audience full of students, this time from Moneygall, that “It’s good to be home.”  Then she identified with schoolchildren, some of whom had been practically scolded a day earlier by the President for going to Catholic school, saying, “We are you. We are just like you.”