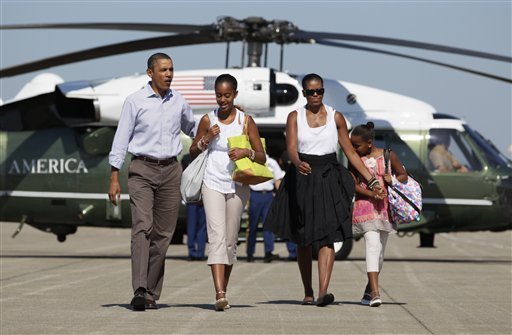 Every year, like clockwork, Mrs. Obama exploits the president’s official business responsibilities to squeeze in a pre-summer vacation, otherwise known as a PSV.

A PSV is where vacation junkie Michelle finds a way to finagle a series of trips at the taxpayer’s expense.

Here is how it’s done:  The president announces his plan to attend the G8 summit at the Lough Erne resort in Northern Ireland.  Michelle convinces Barack to schedule some sort of secondary sideshow so the family can use it as an excuse to travel in the highest possible style, cost-free, compliments of the American taxpayer.

On this trip, the ancillary appearance will be in Belfast where President Obama will subject Irish students to a sizeable dose of his customary blarney. Michelle, as well as Sasha and Malia, will all grit their teeth and endure the Belfast students’ speech.