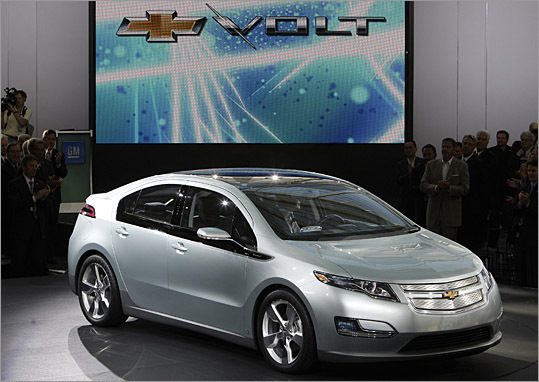 Electric cars could very well be Obama’s new pet project, what with the way he zeros in like a laser on failing alternative energy companies.

Starry-eyed greenies are salivating at the thought of electric cars and light rail replacing all other modes of personal transport.

The origin of the electric power to fuel these battery-driven, anti-economic vehicles does not enter the feasibility equation. Nor does the tremendous tax burden to the citizens. And let’s not forget that pesky, as-of-yet unsolved dilemma of battery disposal.

As noted in the Washington Free Beacon:

Electric plug-in vehicles, such as the Chevrolet Volt, will achieve the affordability of a traditional car in 2020, but only if the government cements a $7,500 tax credit for the vehicles, a Congressional Budget Office (CBO) analyst said on Monday.

Meaning, of course, that by 2020, IF the government will kick in $7500 per car, the price for these little electricity suckers will be almost as low as the price of a gas-powered car.

CBO analyst Ronald Gecan said the production costs of electric cars are falling as automakers improve the technology required to build the car, though the industry still has years to go before it pulls even with traditional internal combustion engines.

“For the consumer there’s a trade off … you have to pay more at the time of purchase,” Gecan said. “By 2020, if the tax credits are left in place, you’d see the gap narrowing … it should shrink enough.”

Gecan told the crowd at the Energy Information Administration’s annual conference on Monday that American gasoline prices would have to reach approximately $6 per gallon for a 16-kilowatt hour vehicle, such as the Volt, to reach price parity with gas-powered cars in its class. He added that it would take approximately $12,000 in tax credits for the government to completely offset the steep price of hybrid technologies.

The tax credit was designed to drive demand for alternative fuel vehicles, though motor companies have struggled to move them off the lot. General Motors has suspended production of the Chevy Volt due to lagging demand. The company slashed the price by $5,000 in an effort to spur sales last week.

Ford’s Dominic DiCicco said policymakers and auto executives have failed to inspire confidence in the market by developing the infrastructure to accommodate alternative fuels, such as electric charging stations on the road.

As with every green machine and progressive earth-saving notion…the true cost-benefit of these ideas has yet to be exposed to the greater population.

Rather, tree-hugging do-gooders choose to gloss over the messy financial details such as the cost of battery disposal, the cost of replacement batteries every 100K miles, the cost of re-charging stations along hi-ways, and so it goes.

As noted by auto expert Ed Niedermeyer in the WFB article:

“…the government’s focus on electric vehicles has been detrimental to the development of other alternative fuels. He pointed to natural gas vehicles, which emit less carbon dioxide than traditional gasoline and the fuel for which costs about $1.15 per gallon.”

Call me old-fashioned and silly…but I rather like the idea of the free market system dictating demand for alternative fuels, research into fracking, and other technologies which might allow the United States to become energy independent, and throw off the bonds of oil-supplying OPEC.

But again, thinking of Solyndra, it’s probably too much to even hope that Mr. Change will use sound economic theory, or even common sense.

Obama told us he would fundamentally change America: that might be the only campaign promise he kept.