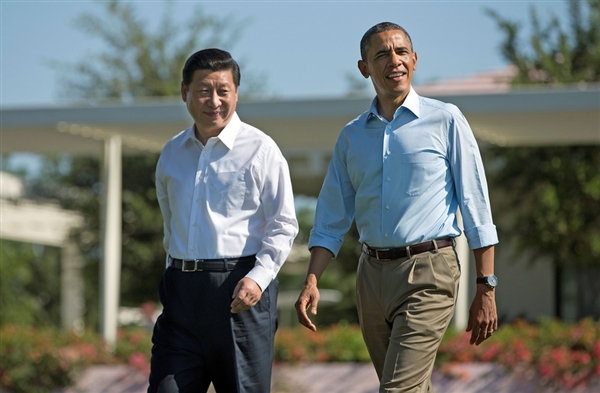 Ironically, during the two-day Sunnyland Summit, in Rancho Mirage, California, right when Barack Obama and Chinese president Xi Jinping decide to take a stroll in the desert, a study comes out that says that fast walkers live longer.

Michelle stayed in Washington DC and missed an opportunity to spend some girlfriend time with Peng LiYuan, which we know didn’t go over well with the Chinese.

Then we find out that the two leaders “saunter” for almost an hour supposedly discussing “cyberspying and intellectual property theft and North Korea’s nuclear provocations, as well as economic competition and climate change.”

Obama even had a custom-made California redwood bench made for Xi, which the leaders sat on intermittently while ‘slowly’ walking around the estate.

Obama’s national security adviser Tom Donilon said the walk was an opportunity “to establish and deepen their personal relationship” and address “the range of issues that we have to address” with the hope of laying a foundation for future discussions.

It’s unknown whether or not every time Xi picked up speed Barack Obama encouraged the Chinese leader, to whom America owes so much money, to amble a bit slower and sit for a while.