He was referring to the one-woman filibuster by Texas Democratic Senator Wendy Davis to kill a sweeping pro life legislation known as SB5.

After hours of filibustering, the evening ended in a state of confusion as legislators tried to end the debate and bring the bill up for a vote while an unruly mob of abortion supporters shouted from the gallery.

Unfortunately the clock ran out as lawmakers battled over technicalities and the legislative special session came to an end before the vote could be tallied.

Cecile Richards, President of Planned Parenthood who was rallying her pro-abortion cheerleaders in the Capitol rotunda throughout the night, took to Twitter and proudly tweeted: 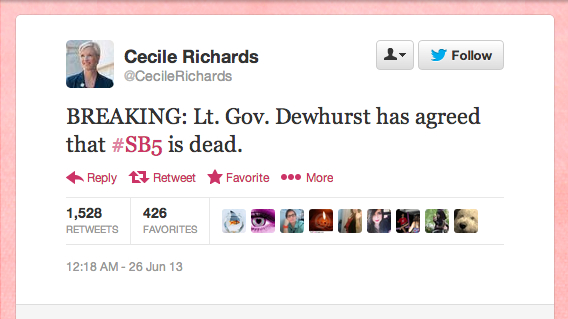 Cheers erupted in the halls of the Capitol as the more than 800 Planned Parenthood minions celebrated the death of the bill.

But what exactly was in this prolife omnibus to stir such passion among pro-abortion supporters?

The bill would ban abortion after 20 weeks of pregnancy and force many clinics that perform the procedure to upgrade their facilities and be classified as ambulatory surgical centers. Also, doctors would be required to have admitting privileges at a hospital within 30 miles.

These regulations are not much different than those we impose upon dentists, podiatrists and other out-patient clinics. And considering that vast majority of Americans support a ban on abortion after 20 weeks (the point at which the baby is said to feel excruciating pain), one is left wondering, why such a common-sense bill triggered such vitriolic reaction.

It’s interesting to point out that during the time that Davis was on the floor filibustering, over 1000 babies had been killed across the United States at the hands of abortionists. As Davis encased her arguments with innocuous terms like “women’s health,” and “individual rights,” she and her supporters were actually fighting to protect late-term abortionists like Houston’s Douglas Karpen, who has recently been accused by staffers of performing illegal late-term and partial-birth abortions.

Photos from Karpen’s abortion facility show babies that are huge, with gashes in their necks, indicating that these babies were likely born alive, then killed, just as Kermit Gosnell did at his notorious ‘House of Horrors’ clinic in Philadelphia. Gosnell was recently found guilty of murdering 3 babies, as well as one woman who died at his clinic when she was unable to receive care after an abortion went terribly wrong.

In fact, there are numerous similarities between Karpen and the Gosnell case, including the virtual nonexistence of complaints by the authorities which allowed both men to continue their illegal operations. Why the lack of complaints? Because when it comes to abortion, there is a severe lack of regularity oversight and accountability.

Which brings us back to the Texas House Bill that was filibustered last night.

Wendy Davis’ celebrated stand was not a coup for women’s health, or even individual choice. It was a covert operation to allow abortionists like Karpen to continue operating outside the bounds of law without any accountability. It was a victory for abortion clinics across the Lone Star State so that they might continue with less regulation and less government intervention than most nail spas and tanning salons.

This morning Davis will be celebrated as a heroine, but for those of us who refuse to demean the value of life in the womb, Davis represents a hideous but powerful lobby at the state and federal level which continues to sacrifice both women’s health and children’s lives at the altar of their golden calf – abortion.

“If I were asked to filibuster on a bill that would save lives, I would do it. I would get a catheter, stand for an unlimited amount of hours, go without food and drink…whatever it takes to SAVE lives. It is sad to me that someone is willing to take these extreme measures just to ensure that MORE babies will be killed.”

President Obama probably didn’t realize the truth behind last evening’s tweet; but I couldn’t agree with him more. Something special did happen in Texas – liberal democrats in the Senate rejected the people’s voice and once-again sided with the pro-abortion lobby to allow the continued murder – both in the womb and outside the womb – of thousands of Texas children.

Late term abortionists, like Karpen, live to see another day. Tragically, the children they kill do not.