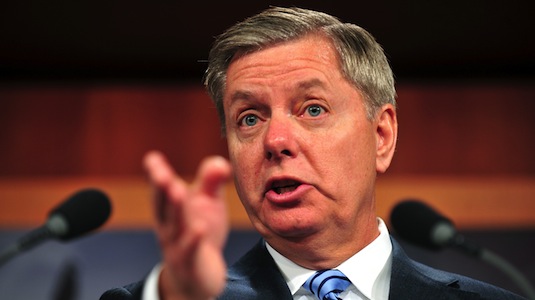 In the spirit of the Declaration of Independence and the Bill of Rights, I would like to announce my support of the effort to repeal Lindsey Grahamnesty.

I invoke those two documents as a specific reminder of the usurpations of our rights and violations of our conservative principles by South Carolina’s senior Senator Lindsey Graham. Some examples are as follows:

Graham has, in word and action, openly assisted in the authoring of the violation of our natural and Constitutional rights known as the NDAA.

He has, in comity with Senator McCain, opposed the patriotic filibuster against the invasion of privacy and violation of Fourth Amendment rights constituted by the government’s domestic drone policy.

He has, in direct opposition to conservative principle and constitutional rights, openly supported the illegal invasion of our privacy by the NSA, and erroneously compared that heinous act with “keeping a list of our phone numbers”.

He has, on several occasions, attempted to bypass the very first physical law of the United States, her border, through legislation designed to overlook or outright forgive, trespasses against the same.

He has attempted to pass legislation to enact a tax on carbon dioxide emissions, with full knowledge of the effects said legislation would have on American jobs, and the propaganda perpetuating the myth that such legislation is necessary for the preservation of our natural environment.

He has endorsed the Democrat Howard Berman in California’s 30th Congressional district race (a Democrat who has voted for the stimulus, Obamacare, and the NDAA), which in effect cancels out his endorsement of Mark Sanford in South Carolina’s 1st.